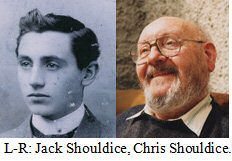 Track 1: The McGuire family’s ownership of the Cork Examiner in the 19th century is explored, as is the family background. William (Billy) McGuire describes the origins of the Irish Republican Brotherhood and the membership of his grandfather, William McGuire, and his brothers, Tom and James, in the organisation, all of whom were involved in fundraising for the purchase of Vaughan’s Hotel in 1917, and the setting up of Dáil Éireann. Tom McGuire fought in WWI with the British Army, and he was involved in intelligence for the IRB in Calcutta. He sent the intellegence gathered to Sam Maguire in London. Track 2: Contains a discussion on the purchase of Vaughan’s Hotel by the McGuire family, to provide headquarters for the IRB and to facilitate the printing of the newspaper, An tÓglach. The whereabouts of the McGuire brothers and William’s wife, Brigid Ryan from Newport, Co. Tipperary, prior to and during the Rising is explained, and the many visits made to Vaughan’s Hotel by revolutionary figures at this time are discussed. Track 3: The sale of Vaughan’s Hotel is recalled, as is the relocation of the McGuire family to “Willowbank” in Castletroy in Limerick, today the location of the University of Limerick. Track 4: The fate of the IRB Archive is discussed, as is the gutting of the interior of Vaughan’s Hotel, which is a great loss to history, Billy maintains.