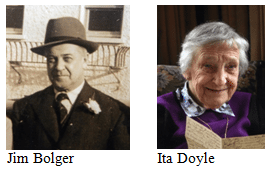 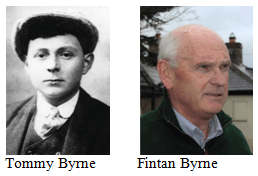 The Broy family came from Rathangan in Kildare where they farmed the land. Áine Broy explains that her father Éamon was an athlete who joined the Dublin Metropolitan Police in 1911, and she provides details of his training in Dublin. He had two brothers, one of whom remained on the farm in Kildare while the other became an accountant and worked at Ardnacrusha power station in Co. Clare. Late in 1917, Éamon Broy began to supply information to the Irish Volunteers; his daughter says that she is unaware of his reasons for so doing. There is little information in his witness statement about his activities during the 1916 Rising. He was introduced to Michael Collins in January 1919 and his daughter recalls his positive impression of Collins. She compares the attitudes of the DMP and the RIC towards the Irish Volunteers, and she explains that other DMP men also contributed information later: David Neligan from Limerick and Cavanagh and McNamara. Broy and Neligan went on to become members of An Garda Siochána. Áine explains that most of her information comes from her father’s written statement. Éamon Broy’s intelligence work was discovered when the papers recording his information were found by a raiding party in Dawson Street. He was arrested as a spy but released at the signing of the Truce. After her mother died, Áine and Éamon travelled around Ireland visiting various sites, and a visit to Clonakilty to see Johnny Collins, brother of Michael Collins, is recalled. Broy was Collins’ bodyguard in London during the Treaty negotiations, and Áine discusses her father’s role at this time. She explains that an aeroplane was on standby at Croydon aerodrome in case the need for escape should arise. Áine reads an extract from Michael Noyek’s witness statement regarding a party in 1921 which was attended by Éamon Broy. She remarks that he, Neligan and Collins were all six feet tall, and in plain clothes they could pass as detectives. Michael Collins secured a job for Éamon Broy in running Baldonnell aerodrome in July 1922 and a year later Charlie Dalton took over this job. Áine explains that the men who usually worked with Collins were, for various reasons, not with him on that fateful day in August 1922. In May 1923 Éamon Broy married Elizabeth Dooley from Birr, Co. Offaly. After he left the Air Corps he, along with Michael Staines and some others, set up the new Garda Siochána force. Áine recalls the intelligence office being run from Crow Street and she remarks on the bravery of the men involved. She discusses the smuggling in of Michael Collins by her father to view the DMP archives on the Volunteers in Brunswick Street on 7 April 1919. The film Michael Collins is discussed and Áine remarks on some inaccuracies depicted in the film. The relationship between Michael Collins and Éamon de Valera is considered, and her father’s view of the Civil War is described. Áine remarks on the position of women and their role at the time. She again recalls the trips she took with her father around the country, when he relived the various events which took place during the struggle. For many years Éamon Broy attended meetings of the Irish Olympic Council with Eoin O’Duffy. Áine remarks that both men were former Garda Commissioners. She speaks about the decision made that the Garda Siochána would be an unarmed force. Éamon’s athletic interests were sprinting and the high jump. Áine has a medal won by her father at a sports event in England in 1917. She believes that he owed his long life to his participation in sport. Éamon Broy is buried with his family in Coolygagen on the Kildare – Offaly border. Áine recalls her father remarking on his narrow escapes during the revolutionary period. She reads a piece written by him about a meeting with Michael Collins at the Five Lamps in Dublin. Éamon Broy’s library of books is discussed. Áine recalls the rumour about Lady Lavery and Michael Collins’ relationship and suggests that this was possibly part of a smear campaign orchestrated by the English. She remembers the annual commemoration of the deaths of Griffith and Collins which would be attended religiously by her father.