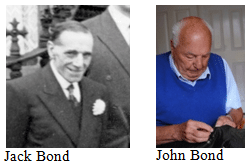 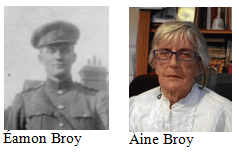 The Bolger family came from Oilgate in Co. Wexford, and Ita Doyle talks initially about Robert Brennan, husband of her aunt Anastasia, who was known as Úna. Robert was a Wexford man and a friend of her father, Jim Bolger. Both worked as reporters for the Enniscorthy Echo and Ita remembers listening to their conversations. Though she was aware of their involvement in revolutionary times, they never spoke about this to the children. Ita tells us that her aunt Úna and one other lady raised the Irish flag over the Athenaeum Theatre in Enniscorthy in 1916. She remarks that at one time photographs relating to the local people’s activities in 1916 were on view at the museum at Enniscorthy Castle, though this is no longer the case. Ita’s father-in-law, Tim Doyle of Templeogue, is recalled, as are the Watkins family who were friends of the Doyle family. Tim Doyle drove the steam tram from Terenure to Blessington, and when that closed he worked near the airport in north Dublin. Ita’s father, Jim Bolger, is remembered. He was a civil servant and he also worked as a part-time Gaelic games reporter, writing under the ‘Recorder’ by-line. Ita says that she has two medals, both relating to the Emergency, which had been awarded to her husband Rory and to her father to mark their service in the FCA. Jim Bolger attended St Peter’s College in Wexford, and later began work as a reporter with the Enniscorthy Echo. Guns were stored under his bed at his digs and when the house was raided he was detained in Mountjoy Jail. Ita reads an interesting letter written by him while in detention in March 1915 to his friend, Teddy Redmond. She remembers Jim as a good father to her and her two siblings. Her mother died when Ita was three years old. Her father never spoke to his children about his activities during the Rising. She reads from an entry in Jim’s diary relating to a meeting of 29 February 1916. At one time, Jim was banned from Enniscorthy and had to live at New Ross for some years, Ita explains, and she feels that this may have been because of his previous arrest. Jim Bolger is remembered as a loyal supporter of Éamon de Valera. Ita remarks that the family home had been full of books and her father read Irish literature and history. She feels that he was not a fighting man, he was not involved in armed conflict and never discussed politics at home as he did not want his family to become involved. Robert Brennan’s autobiography Allegiance has mention of various members of the Bolger family. Ita Doyle was born in Terenure in Dublin and her father worked in the accounts section of the Department of External Affairs, originally in Kildare Street and later at Iveagh House. She remarks that he had the key to the cellar and organised the wine for receptions and entertainments. He was never a man to thrust himself forward, she says. Ellen O’Brien was Ita’s mother, and Ita has traced her maternal aunts and uncles in the USA and the families keep in touch. Jim Bolger was a Gaelic games journalist and a very keen GAA man. Ita says the he probably did sit the Leaving Certificate examination, which was unusual at that time, and she remembers his study of accountancy when she was a child. Her brother served in the Irish Army during WWII and he also later worked in the Department of External Affairs.