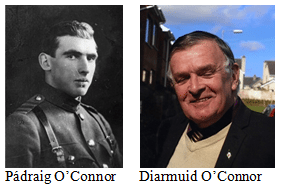 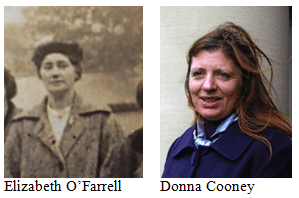 William O’Dea, Éamonn McHale’s maternal grandfather, lived in central Dublin for most of his life, and followed the family tradition in working as a basketmaker. He was a member of the Irish Volunteers in 1916. His father was Laurence O’Dea who was an activist in the Fenian tradition. Éamonn McHale’s mother was Mona O’Dea, the third of William’s five children. Éamonn was born four days after his grandfather’s funeral. Apparently William O’Dea did not speak about his activities as a young man and was disillusioned with the new administration. Éamonn’s mother described to him the military funeral afforded to her father, which was the only information she gave him. It is known that William joined the Volunteers at the Rotunda ice-rink and became a member of 1st Battalion, D Company. He trained in Blackhall Street. Éamonn discusses his great-grandfather, Laurence O’Dea, who was engaged at this time in procuring arms and explains that he read about this in the press coverage of his grandfather’s funeral. William O’Dea was in the Mendicity Institute under the command of Seán Heuston. Éamonn describes the mustering of D Company and their route along the quays. William and 12 other men fought in the main assault and requested reinforcements on Easter Tuesday. At this stage that they were joined by the Fingal men. The location of the Mendicity Institute and its importance is explained. The two stories about whether or not the indigents served by the Institution were in the building are recounted. Éamonn has studied the witness statements, various publications and the pension applications. He feels that there may have been some exaggeration in the statements and applications, allowing for the benefit of hindsight and the passage of time. He has found the process of undertaking the research quite emotional, as he is learning about his grandfather’s actions. The men have to be admired for their idealism and bravery, he says, particularly when they had no experience of warfare. He regrets now that he missed the opportunity to speak to his grandmother. He recalls a comment which was that his mother was her father’s daughter while his father was a Collins man. He remarks that one of the few stories told was that William O’Dea would barber the other prisoners in Lewes Jail, including De Valera. Éamonn feels that earlier revolutionary activities were not spoken about because of the subsequent Civil War, and he is keen that the foot soldiers of 1916 are remembered, as the leaders have always been hailed. William O’Dea was a skilled basketmaker who ran his own business in the 1920s. Éamonn talks about the social context in Cook Street of which the O’Dea family was part. He feels that because of Laurence’s Fenian activities, both he and his son opted to take part in the armed struggle rather than wait for a political solution. Éamonn speaks about the surrender at the Mendicity Institute on the Wednesday and the arrest of his grandfather. Peter Wilson was the only casualty at this location. All of the men were court martialled and were imprisoned in Portland, Lewes and Pentonville prisons. William O’Dea did not apply for a pension or provide a witness statement, though he did request his medals. He married in 1920 and Éamonn thinks he probably did not take part in the War of Independence or the Civil War. He feels that the men in the prisons after the Rising were far more isolated than those at Frongoch, and because of this it proved a harder experience. William O’Dea was a first cousin of Seán T. O’Kelly, and the two men kept up contact over the years. Both Laurence and William are buried in Glasnevin Cemetery with their wives, and Éamonn feels that this would be an appropriate time to mark the graves as the O’Dea’s formed part of the group involved in the Rising. The Sunday Press report of the funeral of William O’Dea in March 1955 is read. His father Laurence had died in February 1935 and Éamonn reads from the report on his death. Éamonn says that his grandfather’s medals are an acknowledgement of his role in the Rising. His aunt Carmel and uncle Fran, both of whom are William’s children, still survive, he explains. Few photographs of either Laurence or William O’Dea from the time are extant, and Éamonn found it an emotional experience to see William as a young man of 27 in the Mansion House photograph of 1917, particularly given the family resemblance to one of his cousins.