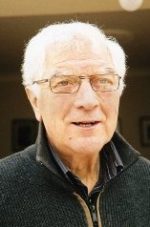 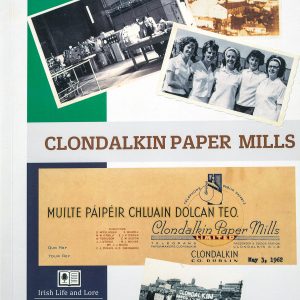 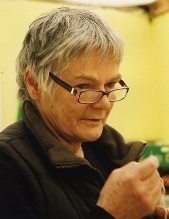 Track 1: Aidan Dardis’s paternal grandfather Thomas hailed from County Westmeath, and Aidan’s research indicates that the Dardis family were originally located in Meath and Westmeath. Thomas worked in Ordnance Survey for about forty years. He later moved to Palmerstown as sub-postmaster. His son Louis, Aidan’s father, was a farrier in Palmerstown, working in his own forge. When Aidan heard that there was work at the Clondalkin Paper Mills he applied for a job after his Intermediate Certificate and was employed there from 1955 until the closure of the mills. In 1983, the business was reopened by a Canadian company, Freedman McCormack Enterprises under the older name of Leinster Paper Mills, and Aidan was employed there for the brief period when the business remained open. He recalls his father’s work, including some railings which he fashioned and which may still be seen on the old road between Palmerstown and Chapelizod. However, most of Louis’ work was concerned with horse-shoeing at race meetings and at stud farms. Aidan talks about his first impressions of the mills when he began working there in 1955 and explains that his brother Don was working in the production planning office at that time. Aidan rose to the position of raw material stock controller. He speaks in some detail about the incidental stock, other than the wood pulp, that he was responsible for requisitioning from the purchasing office. A day in the life of the paper mills and the six-week cycle of paper production is described, and it is explained that the Clondalkin mills produced several types of paper for letters, newsprint, wrapping and so on.
Track 2: Those in the production planning office had dealings with the other processes throughout the mills, and Aidan explains the different ways in which the paper was output, whether in rolls or flat sheets, and then sold on to wholesalers in Ireland or abroad. The factory usually closed for annual holidays for a fortnight in August and also over Christmas. Otherwise, production took place twenty-four hours a day over six days a week. The social club which existed at the time still continues to this day, and Aidan explains that the club has a bar and a pitch and putt course on the Nangor Road. He recalls the industrial action which took place over the years, and the reasons for this are considered. He remarks that about 700 at most were employed in the mills and that people commuted from other areas besides Clondalkin. He says that when he began work in the 1950s, there were three other paper mills on the river Camac: Swiftbrook mills at Saggart and the Killeen and Drimnagh paper mills. A subsidiary company of Clondalkin manufactured heavy paper sacks for flour and cement, he explains. This company was later amalgamated with Bishops in the city centre to form CB Paper Sacks and later CB Packaging. Aidan discusses Smurfits in Clonskeagh which manufactured cardboard, and he remembers when the Clondalkin Paper Mills took over the Drimnagh mills. He discusses the changes to the area since his marriage in 1964, when he and his wife Mary moved there. Track 3: In times past, Clondalkin would have been considered as being out in the countryside, Aidan explains, and he says that the old core of the village still remains as it has been for years, with the round tower, the Carnegie Library and the Roman Catholic church in situ. He talks about the cultural interests in the area, including the Irish language, music and history. The effect of the closure of the paper mills on the area is considered and Aidan says he was fortunate to find other employment as a caretaker in the local girls’ school at that time.