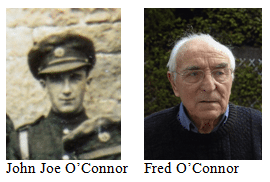 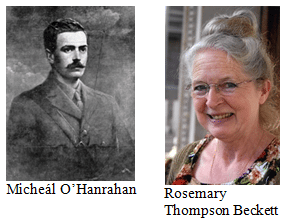 Barry O’Connor recalls his father’s older brother, Lieutenant Tom O’Connor, of F Company, 3rd Battalion IRA, located in the Dún Laoghaire/Blackrock area. The O’Connor family came from Glasthule, and Barry has researched the family back to 1826 in the area. His uncle Tom never married and lived in the old family home on Adelaide Road until his death in 1969. Tom O’Connor was about four years older than his brother William and took a more active part in the struggle, Barry explains. He is remembered as a quiet and solitary man who apparently suffered bad experiences while in prison. Barry explains that it was only after his death that the family discovered details of his activities earlier in life. Tom’s application for the military service pension is the only relevant document to survive. Barry describes the occupation of Carisbrook House in Ballsbridge by his uncle and two others, one of whom was apparently Barry’s father William. On their way to and from the house the group destroyed two telephone exchanges. Tom was arrested by the authorities and spent some time in Frongoch Camp. William O’Connor also applied for the military service pension. He stated that he was in Carisbrook House, though only as a scout. At this time William was 16 years old and was also a member of F Company. During their lifetimes Barry recalls never hearing talk of their activities from either man, and he describes the discovery of Tom’s revolver and ammunition in his old bedroom. The gun appears to be an American police-issue revolver from about 1896. William had hidden the gun in a lead-lined box in the garden so it is not in good condition, Barry says. The Battle of Mount Street and the error in deployment made by the British army are described, as is the arrival of the Sherwood Foresters regiment at Dún Laoghaire and the march into Dublin city centre. In Barry’s opinion the first shots fired at the military column were those from Carisbrook House and he discusses the reasons for his opinion. The original plan for F Company, and the subsequent change in plan when only three men reported for duty on Easter Monday, is described. These men were the O’Connor brothers and one other. During the Civil War, William O’Connor took the Free State side and Barry remarks that the Glasthule area held both Free Staters and republicans. He discusses the occasion when a grenade that was thrown into the O’Connor house during this period, when fortunately nobody was injured. After Tom O’Connor was released from Frongoch, he was promoted to Captain in the IRA and remained in that post until 1921 when the brigade structure was reconfigured. Both he and William took part in the War of Independence and William was interned in Ballykinlar in 1921. After Independence, William became a successful builder in the area. As far as Barry knows, his uncle Tom was neutral but his father joined the Free State Army. Barry has discovered through his father’s application form that he was a Lieutenant in the Intelligence section at Kingstown Harbour. In 1948 William O’Connor married Mary Cullen from Dalkey, and the couple had five children. Barry does not know whether the O’Connor brothers applied for 1916 medals, but he has the Black and Tan medals for both his father and uncle. He recalls the 1966 commemorations which were quite subdued in the O’Connor household. A medal awarded to Tom O’Connor by the Glasthule Mitchels Club for hurling in 1917-18 is examined, and a hurley given to Tom by Éamon de Valera is discussed. Barry mentions a rumour which suggested that Tom maintained his membership of the IRA until the 1940s, and that raids were carried out on the house by the Special Branch. The relationship between the brothers was always good, and Tom worked for his brother in his construction business. Both men were interred with military honours at Deansgrange Cemetery. Barry remembers these sad occasions and remarks on the fact that the family members were not used to a military presence. He remembers noticing some of the Old IRA men of the area in attendance. Barry’s aunt, Christina O’Connor, was apparently involved with Cumann na mBan after the Easter Rising and during the War of Independence. Her future husband was also a member of the Irish Volunteers and the Free State Army. Barry examines some documents, including his father’s application for the military pension in November 1925, and an invitation from Commandant de Valera for Captain Thomas O’Connor to attend a reunion in York Street in August 1917. He has a photograph of the 6th Battalion dating to about 1919 but he does not know the names of the people in the group. Barry explains the way in which he would like his relatives to be remembered. He considers that the actions taken at Carisbrook House and other small outposts should be recorded and officially recognised, and he reflects on the issue of whether or not his father and uncle would have liked the inscriptions on their gravestones to bear witness to their part in Ireland’s struggle for independence.