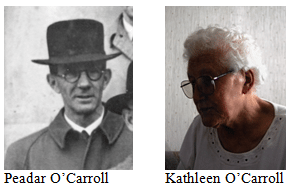 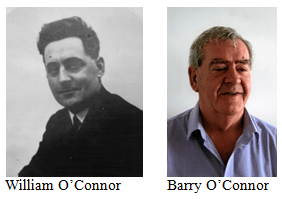 John Joe O’Connor from Dún Laoghaire, father of Fred O’Connor, was born in 1902. He was arrested in 1919 and shared a cell with W. T. Cosgrave in Dublin Castle. He had been a member of a squad who raided a house in Dalkey for arms and was arrested two days later. His son describes what was to happen to the informer who was a neighbour of John Joe O’Connor. Apparently this man had previously betrayed others so he was ordered to be shot by Michael Collins. John Joe was a member of Fianna Éireann in Dún Laoghaire under the command of Eugene Davis. On the arrest of Davis, he took command. Following his arrest in 1919, he suffered beatings in Dublin Castle by a British intelligence officer named Jocelyn Harding, and Cosgrave looked after him in the cell. After six weeks of detention at Dublin Castle, John Joe O’Connor was sent to Arbour Hill Prison and then to the Curragh. Fred recalls the fact that his father was the first man to be arrested from Dún Laoghaire which explained Harding’s interest in him. Michael Collins had ordered that Dún Laoghaire be kept relatively quiet because of the Mailboat, Fred explains. John Joe O’Connor’s mother had died when he was eleven years of age, and his father, John O’Connor, ran a team of cabs at the railway station. Two of John Joe’s sisters died young, and his eldest sister married Jimmy Burn, a former member of the Royal Navy. Fred explains that Jimmy’s Royal Navy kitbag was used to bring items to John Joe while he was imprisoned in Arbour Hill. After the signing of the Treaty, John Joe joined the Free State Army, and his son explains that he was loyal to Michael Collins. He was active during the Civil War years while stationed in the Great Western Railway Hotel, Killarney, where a machine-gun was placed over the hall door. Fred remembers his father talking in later years about an atrocity in Kerry and about the fact that the Dublin Guards were held responsible. He would say that the local Free State soldiers had placed the grenades on that occasion. The rounding up of IRA men at Ballyseedy, near Tralee in Co. Kerry, is discussed. Fred recalls his father mentioning Irish Army officer Paddy O’ Daly, and Joe Doyle from Templehill is remembered. It was from Joe Doyle that he discovered that his father had been promoted to sergeant. Other names that Fred recalls are Scotty Dent and Joe Leonard. He does not have a photograph of his father in uniform. Fortunately, he was able to ask his father about his activities in his earlier days and about his feelings on the question of the split after the Treaty. John Joe considered that the Treaty was the best that could have been achieved with the threat of a destroyer being sent to Belfast hanging over them. He mentions the aircraft which was arranged to be on standby for Michael Collins’s getaway from London at that time, should the need arise. The killing of Michael Collins in August 1922 is mentioned, and John Joe O’Connor’s belief about who Collins intended to meet on that day is discussed. John Joe was later sent to Fenit in Co. Kerry on the Lady Wicklow, and Fred explains that his father told him about the IRA destruction of houses in Kerry during this time. John Joe retired from the Army in 1926. The occasion when the first Civic Guard was shot during an IRA bank raid is recalled. At the time John Joe O’Connor was stationed in Carlow. The Dublin Guard was ordered to Portobello and some days later they took part in the attack on the Four Courts. Army personnel did not want to shoot at their former comrades and so the 14 pounder gun was used. Fred says that he later asked Joe Doyle why he and his father had joined the Army and not remained with the IRA. His father was a supporter of Collins and did not like de Valera. His son recalls him as a happy-go-lucky type, and by 1926 things had settled down and he was in a relationship with Margaret Dowling who was also from Dún Laoghaire. Her brother Fred was active in the IRA but had refused to take sides during the Civil War. Her uncle, Christy Dowling, was involved before he emigrated to New Zealand, never to return. John Joe O’Connor believed that he adopted the right position after the Treaty and his son says that each side was trying to kill the other. As far as John Joe was concerned, nobody from the Dublin Guard was involved in atrocities in Kerry and Fred explains that Paddy O’Daly was not in charge of the local Free State Army men there. Fred remarks that his father’s name became ‘O’Connor’ at the time of his marriage. During the Emergency he rejoined the Army. He was awarded two medals which he gave to his grandson who was also a soldier. He was in receipt of an old IRA pension.