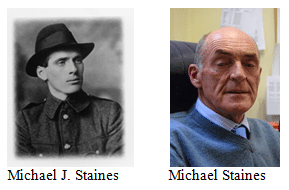 Brian Roche’s paternal grandparents were both Wexford born. Their son, William Roche, was born in Liverpool where he grew up in an Irish community. His son Brian mentions the hurling teams with which he was involved there. He joined the IRA in 1914, and in early 1915 conscription was introduced in Britain. William adopted his mother’s maiden name which was O’Brien, and went to work at a military barracks in Wales, and later at Curragh Camp. Brian mentions the group of men who formed the Kimmage Garrison which included William Roche and the Plunketts. He remarks on the family connection with the Roches of 11, Emerald Street, near Seville Place, in Dublin. He describes the attitude of the British authorities to the activities of the Kimmage Garrison. On the day of the Rising, George Plunkett led the men to O’Connell Street, and Brian provides details of events on that day, including the fact that shooting began when the Lancers arrived on the street. On the Tuesday, William Roche was wounded in the arm, and having received medical treatment at Jervis St hospital, he returned to the GPO. The following day, the wound reopened and he was ordered not to return after treatment, so he stayed at Emerald Street with relatives for a time, and later at Rathgar Road. Brian mentions the generally negative attitude of the Irish public to the rebels at Easter Week, he discusses the arrival of Roger Casement in Kerry and the reason why Pearse proceeded with the Rising in 1916. The change in outlook of the Irish people in 1917 is also mentioned. He discusses the beginning of the War of Independence and the gun fight on the train at Knocklong in May 1919. His father brought the past to life for him, Brian says, and told him many details about his life. A police charge in Liverpool about 1913 is recalled, as are the names of some of William Roche’s colleagues. After the Rising he worked at a tram company in Ballsbridge, and during the War of Independence he was a member of 3rd Company 5th Battalion IRA. He was involved in the burning of the barracks at Stepaside. Brian describes the location of the various Dublin battalions at this time. Like the other members of his company William Roche was trained in the use of explosives. They also carried out other operations. Brian explains that many men from Britain changed their names to avoid conscription in 1915, and William used the name Liam O’Brien. His narrow escape from arrest on one occasion is remembered. Brian explains that his father was relieved that illness prevented him from becoming involved in the Civil War, and he recalls his father’s views in relation to the conduct of de Valera and the Treaty negotiations. He discusses Michael Collins’s involvement with hostilities in the six counties during the negotiations. William Roche was of the view that Collins was the person who, for the first time in Irish history, created a superior intelligence service which enabled a successful war to be fought. Brian explains that after the War of Independence his father had a temporary position with Customs and Excise at Greenore, and he joined the Irish Civil Service in the mid-1920s. His meeting with his future wife is described. Brian considers the influence of his grandfather whose party piece was a Fenian song, and explains that his grandparents returned to Ireland in the mid-1930s. The Roche house in Emerald Street is remembered, and Brian discusses the Black and Tan raids in Dublin and his father’s escape on Bloody Sunday at Croke Park. Mention is made of the O’Tooles GAA hurling team which travelled to Liverpool for matches in earlier days, and whose club rooms at 100 Seville Place were a meeting place for the 2nd Battalion. Brian explains that he attended secondary school at O’Connell School CBS and remembers that in his time the teaching of Irish history ended with Charles Stewart Parnell. He picked up information about the Rising and the aftermath from his father and from others. Brian describes the preparations made for the burning of the Customs House in Dublin in May 1921. He explains that his father was passing as the building was being set on fire but was not involved in that operation. He was actually returning from an operation to blow up the railway line south of Sandymount. He remembers Vinny Byrne, a carpenter and a member of O’Tooles, who was rounded up but released having convinced his captors that he was an innocent cabinet-maker. William Roche died on Easter Monday 1953, and Brian recalls the military salute at the graveside. He has his father’s medals in his possession. The role played by William Roche in the Easter Rising is once again recalled.