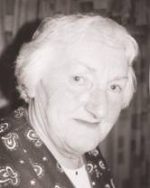 This recording began with recollections of Chris Grace’s childhood. Her father died when she was only two and a half years old and her mother brought up 7 children in a thatched cottage at Carhue, half a mile from the Shannon. Her schooldays in Carrig and her teacher Master Burke were recalled. She went on to vocational school before returning home to manage the farm with her brothers. She spoke about her sister who worked at the slate quarries where the manager at that time was Barney O’Driscoll. She gave a great account of her wedding to Paddy Grace and the All-Ireland Final they attended for their honeymoon. She spoke openly about her husband’s difficulty with alcohol and her hard work while attempting to bring up a large family, manage a pub, and feed the cows.