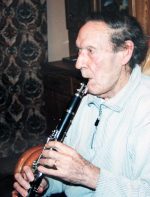 Dan Flynn was born in 1926 into a musical family in Drumtrasna, Mountcollins. During his early youth he was awarded a scholarship to Kelly’s Private School in Abbeyfeale, and he joined the Irish Army at the age of 16. He emigrated to England to join the RAF just after the war, and left all his Irish musical tradition behind him, he says. While serving, he learned to play the clarinet and played classical music and jazz in clubs in England and elsewhere. He takes up his clarinet and plays some pieces remembered from those far off days.

In 2003 Dan’s brothers Eamon and Con Flynn were recorded for Irish Life and Lore. Eamon played the fiddle and Con played the melodeon during a fine session of Irish traditional music.