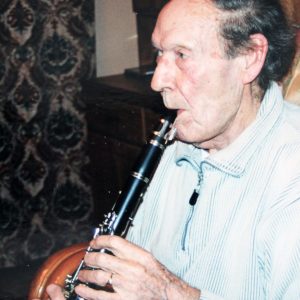 Brian O’Kelly traces his family back to east Co. Galway where his ancestors were granted lands in the 1600s. He speaks in some detail about his grandfather, who worked with the Land Commission on the enactment of the 1903 Wyndham Land Act. He recalls his Rathmines based aunts, Eileen, Nora and Isabella O’Kelly, all of whom joined St. John’s Ambulance at the outbreak of World War 1.

Their father emigrated to Canada and worked as a banker. He volunteered to join the Navy at the outbreak of war and was invalided out following the Halifax Explosion in December 1917. Brian O’Kelly was born in Canada in 1923. In 1928, the family returned to Ireland to live in Templeogue Road. Brian discusses his education, the change of government in 1932 and the effect of de Valera’s government on the people. Also discussed is the Economic War of the 1930s and the outbreak of World War 2.

He joined Clan naPoblachta, became employed in the Civil Service and later workedwith Conor Cruise O’Brien. He prepared briefs for the negotiations for Ireland’s entry to the Common Market and worked for nine years in Germany and in Belgium as Consul. Later, he became involved with the IDA in Ireland, and speaks in detail about bringing the German company Liebherr to Co. Kerry. He also recalls his brief to organise the visit of US President John F. Kennedy to Limerick city in 1963.

He was appointed Irish ambassador to Egypt in 1978 and served until 1985. He recalls witnessing the assassination of Anwar Sadat in Cairo in 1981; he was present on the review stand with Minister for Defence James Tully, who suffered a facial injury.

His next brief involved being placed in charge of the aid programme in five Central African countries. The training of the military in Zambia by Irish Army personnel is also discussed.