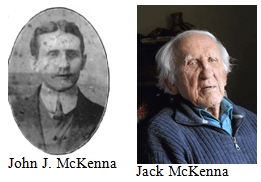 Mary Barrett describes the roles played by her grandmother, Rosalie Rice of Kenmare, Co. Kerry, and of her cousins, Tim and Eugene Ring of Valentia, in sending the telegram to America to alert the world that Ireland had risen in arms at Easter 1916. Her father Denis explains that there had previously been a series of coded messages relating to a sick mother sent from the post office in Kenmare to the cable station on Valentia Island. The final coded message read “Mother operated on successfully today” (meaning, “The Rising has begun”). Denis discusses the network relating to information and the code used. The telegrams were sent from Dublin to Kenmare and on to Valentia, where the cable station was the contact point for America. Denis explains that there was a compound around the station which was heavily guarded by 2,000 soldiers and a British battleship at each entrance to the harbour. Despite this security being in place, two IRB men, Tim and Eugene Ring, were sending significant cables out to the world. Following an investigation by British Intelligence, the route by which the messages were sent was discovered. Rosalie Rice, who worked at the post office in Kenmare, was one of those arrested. She was detained at the Great Southern Hotel in Kenmare, charged with high treason and condemned to death. Her son Denis explains the reason why his mother was not executed. This was due to American influence. He recalls the fact that she never spoke much about her activities unless directly asked. She is described as a quiet and witty individual. She was the daughter of George and Ellie Rice, and Ellie was a member of Cumann na mBan. Rosalie married William Barrett from Buttevant, Co. Cork, and on her marriage she retired from her job. Each summer during his childhood, Denis would spend the holidays with his grandmother Eleanor ‘Ellie’ in Kilmurry, Kenmare. She is remembered as a strong woman whose daughter and sons were involved in the national struggle. She refused to speak to Mr de Valera (as she referred to him rather than Mr President) when he visited her home in later years. Mary reads a note written in 1922 relating to her grandmother Rosalie Rice’s detention in the Great Southern Hotel in Kenmare. A letter written in Mountjoy Prison by John Joe Rice to his sister Rosalie in December 1926 is also read. Mary explains that the family continued the struggle after Independence. Denis recalls visitors to his childhood home and says that contact was maintained with comrades and family far and wide in case of need. His uncle, John Joe Rice, stood for and was elected to Dáil Éireann in a landslide victory at one time, though he never took up that position. He also never accepted the military service pension nor any medals. Denis recalls the time when his grandmother Ellie came to live with his family in Cork, and also recalled is the occasion on which the ADC to President Éamon de Valera called to the door. Denis explains that his mother would not have been as vociferous as was her own mother, and he reflects on his grandmother’s reputation in Kenmare. Denis speaks of the reign of the Black and Tans in Macroom and his mother’s role at the post office there. The troops were carrying out raids on homes and businesses in the town, and would go to the post office to send money back to the U.K. Rosalie would subsequently provide their names and addresses to the IRA. Various incidents from his childhood are recalled which illustrate the attitudes to England of Denis’s mother and uncle. Rosalie Rice was educated at the convent in Kenmare and she began work at the post office on leaving school. Denis discusses her involvement in the movement. He has her Cumann na mBan badge in his possession and he discusses its importance to the family. Mary reads a poem written in Tralee Jail by Tomás Ó Dálaigh in 1923 and she considers the codes used by the writers. She remembers her grandmother and the stories she was told about her life. She discusses Rosalie as a person and the values she attempted to pass on to younger members of her family. Denis explains that his parents met through their work in the post office, and he details their various postings. His father’s dedication to the GAA, and his representation of Avondhu Hurling and Football clubs on the Cork County Board, are recalled. He was also very involved in the GAA in Buttevant. Mary reads a document dating from 1921 from the Civil Service Commissioners in London, sent to Rosalie Rice at the post office in Macroom. Her letter of appointment to Killarney in August 1921 is read, as is a document relating to her time at Kenmare post office. Denis explains that after her arrest, Rosalie was held at the Great Southern Hotel in Kenmare, then at Tralee Jail and was finally transferred to Kilmainham Gaol. Mary reads a letter written by John Joe Rice to his sister Rosalie in 1923. Denis’s grandfather, George Rice, died at a young age. His grandmother Eleanor was a sister of Tim and Eugene Ring. The Ring family of Caherciveen and Valentia were her first cousins. Mary describes the wooden box which holds the family documents and the instruction given by her great-grandmother Ellie about the box and its contents, which has been passed down through the family. Denis remembers Kerryman Michael Quill who was a member of the RIC and was a cousin of his grandmother Ellie. He was given 24 hours to leave Ireland under threat of execution during the Troubles. An autograph book kept by Ellie Rice between the years 1909 to 1911 is included in the family collection, and several of the entries are read by her grandson and great-granddaughter. Mary also reads a card published in remembrance of the men of Easter Week.