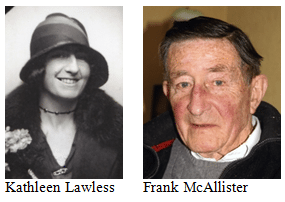 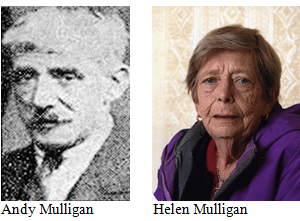 Dolores Dempsey recalls her father William Meehan’s background in Lusk in Co. Dublin, and his schooldays at Corduff National School. He was a member of Thomas Ashe’s Black Raven Pipe Band. The Meehan family were farmers and William was one of a large family. William Meehan and his wife Mary Josephine had thirteen children, of whom Dolores is the youngest. She is not aware of the reason why her father was in the city during the Rising. He fought in the Mendicity Institute. He was later to be employed by Dublin Corporation and the family lived at Clonliffe Road initially. His father-in-law later bought a house for the family at Ballybough. William Meehan was active from 1916 to 1921, and he was a supporter of the Treaty. He was in receipt of the military pension and Dolores remarks that he was invited to an annual dinner at the Mansion House. He died when he was in his 80s, and she remembers his coffin being draped in the tricolour and that shots were fired over the grave at Glasnevin Cemetery. William Meehan was regularly photographed while wearing his medals, and Dolores examines and describes one such photograph. Her parents did not discuss their earlier lives, she says. Following her father’s illness, he would be carried downstairs to watch matches at Croke Park on television and would be very pleased to see de Valera on screen. Dolores is looking forward to commemorating her father’s role in the Rising. She is very proud of him as a father, as a husband and of his involvement in the struggle for Irish freedom. Dolores’s sister Pauline George, who now lives in England, reads from her father’s statement with regard to his memories of the Easter Rising. She recalls him as a very private man and feels that these must have been very difficult times for him and his comrades. William’s wife was Mary Josephine Harmon who was not involved in the Rising. When William was on the run in later years he would stay with her parents at their home in Stylebawn in Co. Wicklow. A photograph of the Harmon house at Stylebawn is examined and Dolores describes the farm there. Pauline remembers that their uncles Larry and James would come from Lusk on match days and visit the family. The association with north Dublin was always there, she says. A photograph of William wearing a kilt is examined, and Pauline remembers his bagpipes being in the house. He taught their sister Máire to play and she became was a member of the Emerald Pipe Band. Dolores recalls their father playing music with a comb and a newspaper. There were ten girls and three boys in the Meehan family, and William and Mary also adopted a boy, Pat. Dolores explains that Pat has done some research and he found the photograph of William in the Black Raven Band. Dolores explains that when her father was on the run in Wicklow, he used a disguise when going to Mass. She feels that this was when he met Mary Josephine Harmon. A marriage had earlier been arranged for her so she and William decided to elope to Dublin.