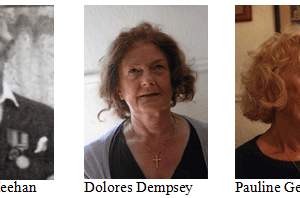 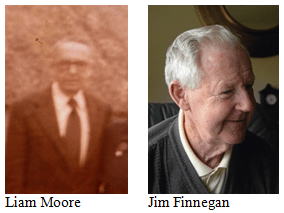 Helen Mulligan begins the recording by explaining that Kathleen Mulligan was just thirteen years old when she married Andy Mulligan. The Mulligan family lived on North Strand in Dublin where they had a piggery and a coal yard. Andy’s surname is believed to have been Byrne, but on his marriage he took his wife’s surname. Andy Mulligan was in the GPO when James Connolly was shot during Easter Week, and following his arrest he was incarcerated at Knutsford Prison. On his release he was paralysed from the neck down due to an injury he suffered during this time. Helen learned much of his story from her mother-in-law. She recalls a story about Andy Mulligan hiding a printed copy of the 1916 Proclamation in the coal yard. Damien Higgins discusses the witness statement of compositor Michael J. Molloy of 2nd Battalion Irish Volunteers. The statement asserts that ‘Dazzler’, a member of the Irish Citizen Army, transported the type by hand cart from West’s Printers for the printing of the Proclamation. Damien discusses the difficulties in discovering details about Andrew Mulligan’s origins. Helen explains that Andy got his nickname owing to the highly polished horse brasses which decorated his hand cart. It appears that Andy worked undercover for the Irish Citizen Army, she says. A great difference in age existed between Andy and his wife, and Helen says that Kathleen knew nothing about her husband’s life before their marriage, or about his activities during the Rising. The couple had fourteen children, of whom nine lived. When Andy came home from prison paralysed, Kathleen cared for him. The Black and Tans often raided their home in later years. Damien reads from a document dated 1945, detailing the awarding of a pension to Mrs Kathleen Mulligan to be paid until her death. He also reads an invoice for the funeral expenses of the late Andrew Mulligan in 1942. An extract from the witness statement of the compositor of the Proclamation is also read, and Damien explains that one thousand copies of the Proclamation were printed at Liberty Hall on Easter Sunday night, 1916. Helen once again discusses the Mulligan family, and in as much as she knows, Andy never worked in the family business. Damien explains that the coal business was still in existence until about 2000. He discusses the removal of the pigs from the city centre in the 1940s owing to an outbreak of foot and mouth disease. Helen remembers Kathleen Mulligan as being bitter because her life was uncertain from 1916 onwards owing to her husband’s involvement in the struggle. Patricia Mulligan recalls her ‘Granny’ (Kathleen) Mulligan as the boss of the family who protected them all as well as she could. Damien reads an article about Andy ‘Dazzler’ Mulligan from The Sunday Press, from which it appears that his role in Liberty Hall was to transport guns and ammunition as well as the type for the Proclamation. He would appear to have been a very discreet person. Patricia recalls some information she received from her cousin May who remembers raids on the house when she was a child. As Helen remarks, Andy did everything for Ireland and did not have much of a family life. Damien discusses his interest in discovering more about his great-grandfather’s life, and Helen explains that the only person who knew about Andy was his wife Kathleen and his daughters, Kathleen and Molly. Helen spent a lot of time with Kathleen before she died in 1973 at the age of 87. The current increased interest in the 1916 Rising is also commented upon.