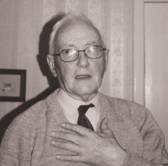 While collecting folklore in Shinrone, I called to the home of the Coonans. There I met Eamon Coonan who informed me of the great wealth of history associated with the area. Four generations of his family had farmed the land there. Much of his historical information came from his father, who remembered the landed gentry, the Rolleston-Spunner family, who lived in the area in former times. Eamon’s father had told him that finely cut stone was taken from the Big House after it was vacated, to build Mount St Joseph Abbey, Roscrea. We toured the area, visiting the graves of the local gentry.