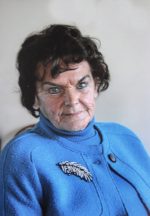 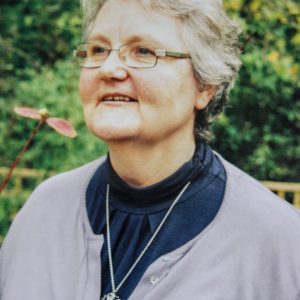 Edith Buckley was born and she grew up in the Manchester area. She qualified as a nurse and worked at the Royal Hospital in Huddersfield where she met her future husband, Jack McGuire who was a House Surgeon there. Edith talks of how interesting a man was Jack’s father, Joe McGuire, who was a GP in Listowel. Joe’s compassionate nature is illustrated by the fact that, when called to deliver a baby in the local hospital, he always carried an imitation gold ring in his pocket which he would offer to unmarried mothers to wear, thus affording them the dignity of avoiding the stigma of their circumstances and possible coercion to enter the local mental asylum in Killarney. When Joe retired in the 1950s, Edith and Jack returned to Listowel and took over the medical practice and pharmacy. Edith assisted Jack in his work and recalls that in earlier days she would regularly travel to another jurisdiction to obtain condoms for their clients, which would then be dispensed in the pharmacy. Edith speaks of her conversion to Catholicism and the difficulties associated with this decision.