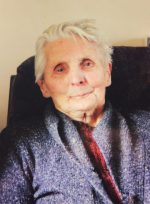 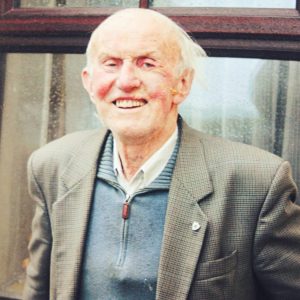 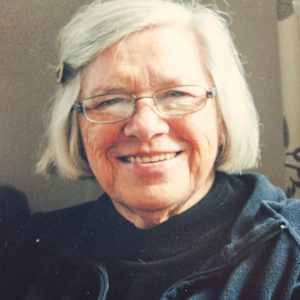 Eileen Kennedy grew up in the townland of Gurteens where she lived with her parents and six siblings in one section of a long thatched house. The Hanafin family of ten children and their parents also lived there. She recalls her schooldays when before leaving home she would churn the butter and then bring a can of milk to the schoolhouse and sell it to the neighbours en route. Her grandfather, Séamus Kennedy, was a servant boy who would travel to the hiring fairs in Tralee for hiring by farmers by the week. Her grandmother, Nan, was a member of the Ashe family from Kinard, and was related to the patriot Thomas Ashe. In her youth, Eileen would watch the train pass through the family lands at Gurteens as it sped up and down the Ballinclare valley. Eileen married into the Galvin family in Gorticurrane. Mrs. Griffin, the gatekeeper who lived nearby, would open and close the railway gates twice a day. All of the Griffin family was involved with the railway, working as navies or in general maintenance. The women of the village of Lispole, who would bring butter on the train to Dingle are recalled. This was not only a commercial enterprise but also a very important way of maintaining social contact in a rural area. The train would also carry the schoolmistress, Kate Driscoll from Camp, to the local school at Lispole which Eileen attended. She remembers timber and other commodities being loaded onto the wagons at Lispole. The family of Antartic explorer Tom Crean were neighbours, and Eileen describes the “wildness” of his brothers who emigrated to the United States.