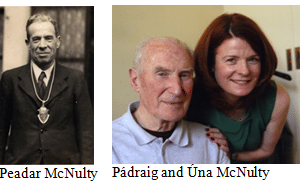 Eithne Mallin explains that she was born on Easter Saturday in 1959. The date was March 28th, the date on which Easter Sunday fell in 1916. She discusses her uncle, Fr Joseph Mallin, and his sister Úna who became a nun. They were regarded in her home as just family members and she does not recall any conversations about 1916. The family similarities between her father and Fr Joseph are also discussed. Eithne’s maternal grandfather was Gerald (Garry) Byrne who served in the 4th Battalion IRA based in Meath, though much of his training was undertaken in north Co. Dublin. He lived in Crumlin at that time. Michael Mallin lived in the Kilmainham/Rialto area. Eithne was born in Kilmainham and lived in a property owned by Michael’s sister, Cathleen Mallin. The Mallins originally came from near Clanbrassil Street. Eithne’s paternal grandfather was a carpenter. It is very important to Eithne to remember both the roles of Michael Mallin and of her grandfather Garry Byrne, and she remarks on the overshadowing of Garry Byrne even within her own family. As children in 1966 she and her two sisters knew that the Mallin connection was the more historically important, though they did not know the reason why this was so. Eithne has no clear memories about any family discussions on the Rising, and she says that it is just recently that her mother and her uncle have begun to talk about their father Garry. Six members of the Byrne family were involved in 1916, including the three brothers Garry, George and William who were IRB members. Their sisters May, Winnie and Kathleen were members of Cumann na mBan. A fourth sister was at that time too young to join. Eithne explains that Garry Byrne was very disappointed at the issuing of the Countermanding Order. Her uncle told her that every Easter during the years after the Rising Garry would be depressed because he had not served. Eithne reflects on the origins of Irish freedom which sprung from Easter 1916. She studied History at UCD and remembers that Jane de Valera was in her class. She comments on the relative importance of the men of 1916 depending on whether or not they were signatories to the Proclamation, explaining that Michael Mallin’s widow did not receive a pension for quite some time as he had not been a signatory. The Mallin family became disappointed and disillusioned with the government because of this situation. The Byrne family have Garry Byrne’s medal and some original letters in their possession. Eithne considers that the witness statements are important in filling out personal stories because the individuals involved often did not speak about their activities. She has discovered that her grandfather had not learned the Irish language at school but had joined Conradh na Gaeilge in order to do so. There he met with people with a similar desire to be fully Irish. Eithne speaks about her connection with the Mallin family and its importance to her. Her father’s brother Éamon kept up the family connections, she says. She discusses the support given to Michael Mallin’s widow by the other families after 1916. She again recalls the Byrne family and their part in the Rising and its aftermath. Her grandfather was interned at Ballykinlar Camp, and it appears that Garry may have been arrested in a case of mistaken identity with his nephew of the same name. Her paternal grandfather, John Mallin, was detained at Wormwood Scrubs where his hearing was damaged. She reflects on the forthcoming commemorations in 2016, and says that she is encouraging her children and other family members to find out more about their family. She remarks that Michael Mallin was a strategist who had had military training in the British Army, and she expresses her disappointment in relation to some of what has been written about him. She says that soldiers follow orders and that there needs to be greater understanding of that fact. In her opinion, freedom would not have been so quickly gained if the Rising had not happened. She feels that having studied History she can look back in hindsight with some objectivity, but that being the case, she would not change anything that did occur.