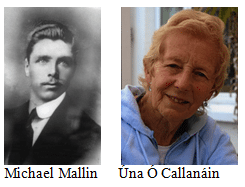 David Kenny explains that Patrick Pearse’s final letter to his mother was given to David’s great-grandfather, Matthew Walker, for delivery. David’s grandaunt Máire Nic Shiubhlaigh, and her respect for Thomas MacDonagh are recalled. David, who has a great love of history, explains that the family moved to Louth and Meath, and his father, Edward, was brought up in Laytown, Co. Meath. A 1919 photograph is examined, taken on the wedding day of Violet and Paddy Gore, which includes a clear image of Michael Collins. An anecdote is told concerning David’s grandmother, Gypsy, who on one occasion met Collins while carrying dispatches for Cathal Brugha. David discusses his pride in his ancestors and his own disquiet at the loss of the idealistic past and the present-day importance of self-indulgence. He says that the 1916 generation paid a huge price, with much pain and suffering involved. He recalls an incident in Laytown of many years ago which involved his grandaunt Máire. Edward ‘Ted’ Kenny, father of David, was a journalist who spent time collecting information about the Abbey Theatre and Jacobs from his aunt Máire and his mother. His notes were written up as a book which includes a foreword by Pádraic Colum. The book was published by James Duffy but Edward was unhappy with the end result. David has found the manuscript as corrected by his father and he says that the revised book will be published in 2016 by New Island Books. He feels that his father lived in the shadow of his family. David explains that the 1917 Proclamation was printed by his great-grandfather Matthew Walker. Copies of this document are now rarer than the earlier version. He remembers receiving a bag of old papers from his father which contained a postcard showing an image of Dublin in 1915. Many papers still survive, he says, and his grandmother’s brother-in-law, Joe Stanley, had some family items. The handbills printed by his great-grandfather, with samples of Patrick Pearse’s handwriting for fundraising for prisoners, are mentioned. David reflects on the period after 1916 and before the War of Independence. His grand-aunt Máire’s proposal that the Abbey Theatre actors remain amateur, and Yeats’ opposition to this proposal, are discussed. The setting up of the Theatre of Ireland by Máire and others, with the Pearses and Thomas MacDonagh, is described. David explains that this new theatre was quite successful, though it is now forgotten. He recounts an anecdote relating to Constance Markievicz, passed down in family lore. He considers his family’s educational background and that of other nationalists. He considers them to have been naturally intelligent people who also had an international perspective. There were international journalists in Dublin at that time, and the Abbey Theatre toured to the USA. He feels that Máire could have had a successful career in acting but she gave up this opportunity. The Theatre of Ireland closed with the advent of the Rising and later she acted with the Abbey and elsewhere. She also became active in the Irish Countrywomen’s Association. David is now writing a book concerning his grandaunt and her family. Máire’s brother, Frank Walker, fought in St Stephen’s Green during the Rising, and another brother, Charlie, printed The Irish War News with his father Matthew. David explains that with the coming of Independence, the family settled down to a quiet life in Laytown, Co. Meath. He thinks that Máire has never fully disappeared from the historical record but that little is known about her in the public mind. His family and its history were very important to his father Edward, David says, and he feels that historical family figures had a similar affect on Ronán Ceannt. As far as David is aware, Máire Nic Shiubhlaigh and her sister Gypsy played little part in the War of Independence and the Civil War. He has found party membership cards owned by both women. He examines a copy of Tom Barry’s Guerilla Days in Ireland, which bears a significant inscription. The book was dedicated by Barry to his brother-in-law, Bob Price, who was husband to Máire. David discusses the connections between Barry, Price and O’Malley. Price became a member of the Free State Army in the independent State. David considers Price’s friendship with Michael Collins and his possible part in the Ballyseedy tribunal. He remarks that the friendship and respect which existed between men of both sides is little discussed. He says that he would like to research Bob Price’s work in his Irish Civil Service position which involved finding employment for former IRA men.