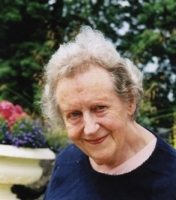 Track 1: Memories of childhood games and fun, growing up in Tullamore. Recalled her father, John (Jack), a veteran of World War I, who was wounded during the conflict. The management of the distillery in Tullamore during the Emergency years. Reminiscences of her grandfather who was the first in King’s County to own a car. Track 2: Early memories of the distillery with its distinct aromas. Discussed an enterprising venture which the children undertook during the war years, mixing whiskey with grain to lure pigeons and sell them locally for food! Her sister who married into the Powers whiskey family. Track 3: Recalled a number of Tullamore Dew staff members; watching the business expand into the William’s 5 Star supermarket business. Track 5: Discussed her father’s retirement from the business in 1957; her move to Dublin; becoming an antiques dealer in her premises beside the gates of the Dáil in Kildare Street. Memories of the antiques in which she specialised; her clients; visits to auction rooms and house auctions. Recalled that she was the first of three women in Dublin to own an antiques business, the other two being Phyllis Jackson and Eileen Spain. Track 6: Memories of Tullamore and the tugboats which travelled along the canal, and she discusses the artefacts she has collected from the distillery over the years.