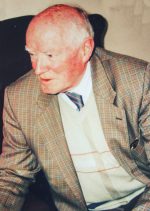 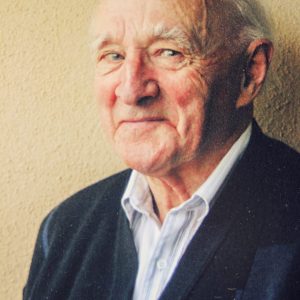 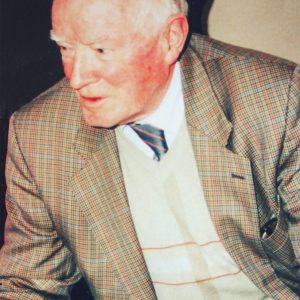 John Knightly has fond memories of occasions when he travelled as a youth on the long journey from Annascaul to Tralee on the narrow-gauge railway line and then on the main line to Mallow and onward to Banteer where his father was working as Stationmaster. He was allowed by the train drivers to travel at the front of the train, and he explains that there were two drivers and two firemen on duty, and every four miles one would expect to see maintenance men on the line. The excursions to Castlegregory and to Inch Beach for motor-bike racing were very busy days on the line with the carriages packed with passengers and some even travelling on top of the carriages until this practice was halted following a tragedy. The day of Annascaul Fair was also a very busy time for the train and also for the village. John’s father was later transferred as Stationmaster to the south line in Castlemaine. John recalls the large stock of barreled mackerel arriving up from Renard on the train, to be transferred to the main line for Tralee. Another commodity to be carried by train was rabbit skins for export to the Paris market. Special trains were provided for the beet harvest to be brought to the Mallow beet factory, and ice trains brought ice to Renard during the years of the Emergency in Ireland.
Page