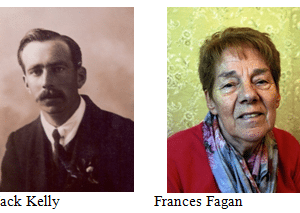 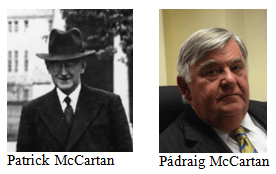 John Maguire was born in Beggstown, near Dunboyne in Co. Meath. His father, James, and his paternal uncles, William and Peter Maguire, were involved in the 1916 Rising. James Maguire’s group included Seán Boylan, Frank Lowndes and Jack Kelly, and they were trained by Con Colbert. James was assigned to Tyrrellstown with the Co. Meath men in 1916. They laid mines on the railway line at Stackumney near Celbridge, but were forced to retreat. John discusses the green flag in his possession which was made by his father at the request of Seán Boylan for the 1948 commemoration of the 1798 rebellion at the Hill of Tara. The three Maguire brothers were republicans, he says, and he recalls Bernard Dunne who later joined the Free State Army and rose to the rank of Lieutenant-Colonel. Bernard and James Maguire were friends, though they took opposing sides. James Maguire played no active role in the Civil War. John recalls the people who called to his father requesting a reference for their application for the Old IRA pension. A story told by Jack Kelly to his own son Mick about a raid by the Black and Tans is recalled, as are the firing parties at the funerals of old IRA men. As far as John knows his father was never arrested or imprisoned for his activities, and he discusses his father’s connection with Fianna Fáil and events at election time. An anecdote about an election candidate is told, and he explains that James would introduce each candidate to the crowd when they were ‘on the stump’. John explains that James Maguire and Christopher Poleon (‘Kaiser’) were good friends, and he describes a skirmish involving some RIC men. James Maguire’s meetings with Seán Boylan’s father in the 1950s, when the Bureau of Military History was creating its archive of statements, are recalled, as are his grandfather’s origins in Drogheda and his parents’ home near Dunboyne after their marriage in 1923. John himself has lived in the area all his life. He reflects on his father’s hard work to provide for his eleven children, explaining that he had difficulty getting regular employment owing to his political affiliation. He often worked breaking stones with Kit Lynam who was in the same situation. His facial birthmark, which made him easily identifiable, is mentioned and John recalls the fact that General Seán Boylan came to the family home to mend fences with his father about earlier days. The Thomas Ashe memorial and the fundraising by men such as his uncle Johnny McAuley and members of the Fingal Brigade, including (former Minister) Paddy Burke, are discussed. The unveiling in the early 1950s was the last official function of President Seán T. Ó Ceallaigh. John recalls a plumber, undertaker and taxi driver who, on the eve of 1916, was asked to have a taxi ready, but owing to difficulties in getting petrol, he was late and was last in the taxi queue, and thus his life was saved. His father’s medals marking his role in 1916 and the War of Independence are important to John and his family, and he remembers that very occasionally his father would mention his part in the struggle for Irish independence. He feels that time brought the old men together, and common interests in the GAA were also beneficial. His father played hurling for Dunboyne, winning three Senior Hurling Championships in the 1910s. He was the eldest of the family and John also recalls his uncle Willie Maguire. Reflecting on whether or not the men of the Old IRA would be happy with the Ireland of today, John explains that his father was keen to see a thirty-two county Ireland. He did not live to see the rise of the modern IRA and the ensuing violence. In conclusion, the hardworking life lived by James Maguire and his wife Mary Jane is discussed.