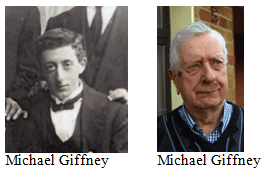 Joe Good was born in the city of London. In adulthood he was active in the republican movement there and got to know Michael Collins. He was in the GPO in 1916, was arrested and sent to Frongoch in North Wales. Following his release at Christmas 1916, he became active in the IRA and after Independence he joined the Free State Army and was commissioned as a Lieutenant. Later in life he worked as an electrician, and later still at the Royal College of Surgeons. Kevin Good explains that the Good family was active in the Gaelic League, the IRA and in other organisations focussed on Irish nationalism. Prior to the Rising, Joe Good travelled to Ireland from London with Michael Collins, Ernie Nunan and Johnny ‘Blimey’ O’Connor. Kevin’s late brother, Maurice Good, has written about their father’s activities. Joe Good and his friends believed in the democratic right of the Irish people to freedom, and Kevin recalls his father talking about his beliefs and of his dislike of empires. His love of nature and gardening is remembered. Kevin discusses his aunts Kate, Annie Rose and Mary, all of whom were republicans. Joe was a member of the Kimmage Garrison, and Kevin discusses his view that the men of 1916 were realists who knew that they were up against the might of the British Empire. Kevin speaks about the later compromise not accepted by some of his father’s friends, though Joe Good saw the Treaty as a step towards complete freedom from the Empire. Kevin describes his father as an honest man who was disciplined and frugal by nature. He remarks that Joe had seen corruption in Europe and did not trust politicians. He is recalled as a man of great modesty who loved Ireland whole-heartedly. After his father’s discharge from the Irish Army he worked around the country as a journeyman electrician on rural electrification. Kevin speaks about the Irish culture and tradition in their home when he was young. Joe Good’s attitude to de Valera and the people who adopted the anti-Treaty side is considered. Kevin’s grandson Cillian, who is present, enquires about his great-grandfather’s attitude to the IRA and the continued struggle in Northern Ireland. Kevin describes his father as a democrat, a republican and a Labour man who desired freedom for all people, regardless of race or class. He recalls his father’s opinion on the attitude of the British public to the Irish. Joe Good’s songs on the subject of freedom in the choice of a leader in a democratic manner are remembered. The military funeral afforded to Joe Good is recalled, and his book Enchanted by dreams: journal of a revolutionary is mentioned. Kevin’s mother was Mary Ellen Donovan whom he remembers as having been less extreme in her views than was her husband. He thinks that his parents met at a ceilidh and he is aware of the fact that they knew one another in London. Kevin’s aunts were in Cumann na mBan but he is not certain whether or not his mother was also a member. Sadly, Kevin Good passed away in September 2015.