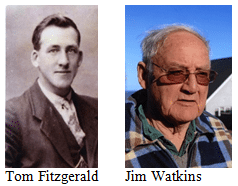 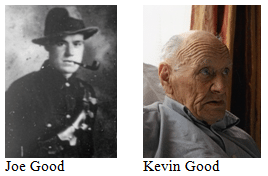 The father of the interviewee, Michael Giffney Snr, was the only son of Laurence and Mary Julianne Giffney (née Troy). The Giffneys originated in Co. Wicklow and Michael’s grandfather, who worked as a joiner and coffin-maker, came to Dublin for employment. Michael Snr was born in New Ross but reared in Dublin at Seville Place, where the Duffy family were neighbours. Michael Jnr mentions that his father’s teacher was Frank Cahill who became a member of the 1st Dáil, and he said that Cahill had become disillusioned with politics and had returned to teaching. Another acquaintance from this time was playwright Seán O’Casey, who attended St Barnabas Church of Ireland School. Michael’s grandfather worked at T and C Martins, a business which dealt solely with ecclesiastical work. Michael recalls his father’s first cousin from New Ross, and discusses his father’s trips to visit his aunt in Wexford. Michael Snr was a member of F Company, 2nd Battalion IRA and he and a friend, Jack Madden, happened to be on O’Connell Street waiting for a tram when the fighting broke out in 1916. The two men immediately dashed into the GPO and according to Michael’s witness statement, he was sent out and took part in action on Clonliffe Road and the North Strand, after which he returned to the GPO. During the evacuation, he was wounded in Henry Place by a ricochet bullet. Michael remembers his father as a shy, retiring person who was anxious to impress on his sons that hatred of people was not good, and Michael recalls the resentments held by different groupings from the 1930s to the 1950s. He remembers seeing graffiti relating to the imprisonment of Frank Ryan, a 1916 leader who also was engaged in the Spanish Civil War, and recalls Ryan’s death sentence, its commutation and his deportation to Germany, where he died. He also recalls Seán Russell, another IRA member who fought in Spain. After the surrender in 1916, Michael Giffney Snr was captured and taken to a field hospital at Dublin Castle for treatment, following which he was transferred to Kilmainham Gaol where he spent about three weeks. He was then moved to Wakefield Prison in England and on to Frongoch in Wales. He was released in July 1916. He had been working for T and C Martins, and on his return he was requested to sign a statement stating that he was no longer active. He refused and thus lost his job, though an apprenticeship was offered to his eldest son. Michael Snr then worked for joinery firm Ross and Walpoles in Dun Laoghaire and later, for over a decade, he worked on Adam and Eve’s Church on Merchant’s Quay in Dublin, for which he made the seats and designed the confession boxes. He took no part in the War of Independence or the Civil War. He supported the anti-Treaty side. His friend, Jack Madden, became a Captain in the engineers in the Free State Army, and Michael Jnr remembers his family visiting the Madden home. He tells a story about his discovery of a gun there. He discusses his own interest in history. He recalls the commemorative stamps issued by the Post Office in 1966, and earlier in 1941 for the 25th anniversary of the Rising. In 1942 Michael Snr received his 1916 participant medal and the lapel ribbon which arrived by registered post. He was in receipt of the Old IRA pension, which transferred to his widow who lived to her 90s. Michael Jnr grew up on East Road, and he recalls his father’s cousin, May Cavanagh, who would visit his home. He thinks that she may have been a member of Cumann na mBan. Some of Michael Snrs’s schoolfriends, such as the Lemass brothers, are recalled from a list prepared by the O’Connell Schools. A group photograph is examined. Michael Snr’s mother was Bridget Reilly whose family came from Coolock. He says that his maternal uncles were possibly out in 1916, and he talks about Patrick ‘Sonny’ Reilly whom he knows joined the Irish Volunteers in Fairview. Michael discusses his own life, explaining that he started work at the Harbour Master’s office at the North Wall, where his boss was Commander O’Brien Twohig. After about ten years he changed career and worked as a sales rep for Beechams, and later for Corcorans of Carlow. In 1980 he began his philatelic business based near the Ha’penny Bridge. He tells an anecdote about this business which connected 1916 and Hollywood!