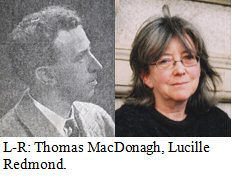 Track 1: Mary McGrath’s earliest memories of her grandfather, Joseph McGrath, on visits to his home in Cabinteely in Dublin, are recalled, and she details his characteristics and his passion for horses. He and his brother, Patrick, were out in the 1916 Rising, and their activities at this time are discussed. Joseph McGrath’s position in Marrowbone Lane is described. His retelling of the story of his escape from prison in England, and his enjoyment in its telling, is also recounted, as is his membership of the First Dáil and his support of the Treaty. Track 2: Joseph McGrath and Michael Collins were close friends. Mary explains that her grandfather warned Collins about the danger of going to West Cork on the eve of his departure from Dublin. He was shot at Béal na Bláth on 22 August 1922. The effect on the military of the death of Collins is articulated. Mary explains that because of his dissatisfaction with the attitude of the government to the Army mutiny at the Curragh, Joseph McGrath resigned from his position in government in 1924. Joseph McGrath maintained friendships in business with people from both sides of the divide in later years, and his granddaughter describes his success in the breeding and training of thoroughbred horses. Track 3: Contains a discussion on the Irish Hospital Sweepstakes and its origins and successes, and the other business ventures in which Joseph McGrath was involved. His wife, Aileen Downes, is also recalled by her granddaughter. Track 4: The funeral of Joseph McGrath and the attendance is described. Mary McGrath discusses the businesses in which her grandfather was involved in his later years. Track 5: Mary’s childhood visits to the McGrath home in Cabinteely are recounted, and she recalls her grandfather speaking of the 1916 Rising. Her feelings of bearing the McGrath name and her pride in her connection to a man of vision and foresight, who fought in 1916, are also described.