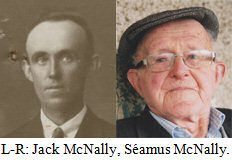 Track 1: The Monaghan background of the MacMahon family is explored and Fr. Hugh MacMahon explains that his father, Brian MacMahon, came to Dublin in 1915 to live in Glasnevin with his sister, Sorcha and brother, Peadar, who had arrived there in 1912 and had lived in Amiens Street in a house close to that of Thomas and Kathleen Clarke. Shortly after Brian’s arrival in Dublin he joined the Irish Volunteers in which his brother, Peadar, was a Section Commander under Thomas MacDonagh. Track 2: The illness suffered by Brian MacMahon in the days prior to the Rising, which led to his hospitalisation at the Fever Hospital for the duration of the conflict, is discussed. His siblings, Peadar and Sorcha, a member of Cumann na mBan, were involved in the Rising. Peader was with Michael Mallin in Stephen’s Green, and later in the College of Surgeons. Sorcha was cycling round the city with guns in her bicycle basket, for delivery mainly to the GPO. She also collected messages from Thomas Clarke and P. H. Pearse for delivery to their families. Fr. Hugh explains that, after the Rising, she smuggled her brother Brian’s Volunteer uniform back to their home in Monaghan. During the War of Independence, Brian MacMahon was Adjutant of the South Monaghan Battalion of the Volunteers, acting as a training officer on the instructions of Michael Collins. Track 3: Sorcha MacMahon’s deep involvement in the Irish Volunteers Dependents’ Fund with Kathleen Clarke, after 1916, is discussed. Fr. Hugh explains that Sorcha did not become involved in the Civil War, due to her deep friendship with people on both sides. She married Tom Rogers and the couple had one child, Peg, from whom Fr. Hugh got much of his information on the family’s involvement in the 1916-1923 period. Track 4: Contains details of Brian MacMahon’s role in the Civil War, as Captain in the Free State Army, based in Dundalk Barracks. The attack on the barracks by republicans, under the command of Frank Aiken, on 14 August 1922, which caused life-long injuries to his father, is described in detail by Fr. Hugh. In 1932, Brian married Rose Finnegan from Killanny, near Carrickmacross. During the War of Independence, Peadar MacMahon stayed with the Daly family in Limerick, where he organised the IRA in the area. During the Civil War, he was Officer in Command stationed at the Curragh, and was promoted to Chief of Staff of the Free State Army. Tracks 5-6: Fr. Hugh MacMahon explains that much of his information on his father’s activities during the War of Independence came from notes made by his father, and kept by Canon Marron in Monaghan on condition that the contents should not be released until recently. In the notes, details are given of the fact that the local parish priest gave permission to the Volunteers on the run to miss Sunday Mass, due to the risk of being spotted by the authorities.