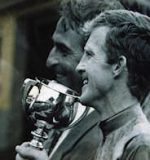 Track 1: Mick Kinane’s early days, growing up on Holy Cross and Killenaule, Co. Tipperary. His education and his apprenticeship as a jockey at Liam Brown’s stables in The Curragh in 1976. Track 2: His first winning ride at Leopardstown as an apprentice in 1975. Becoming Irish Champion Jockey in 1984. Beginning work in Ashbourne Stables for Michael Kauntze. Track 3: The skills in horseracing, having confidence and his injuries over the years. Track 4: Returning to work in Liam Browne’s stables on The Curragh prior to working in Dermot Weld’s stables. His relationship with the trainers and getting instructions for races. Track 5: The layout of various racecourses. The money in the sport. Track 6: Owners and trainers with whom he has been involved over the years, and the great horses with which he was successful. The difference between high expectations and the absence of pressure, and the pyschology involved. His favourite horse of all time was ‘Sea the Stars.’ The extreme discipline which he had to apply to his weight, which averaged 8.7 stone. Staying with the flat races rather than jump races. Track 7: His retirement in 2009. Track 8: His marriage to Helen Clarke in 1983 and life at Coolmore Lodge on The Curragh. The great success he had in 1990 in winning the Belmont Stakes, one of the legs of the Triple Crown in America. The horse called ‘Go and Go’ was owned by Walter Haefner and trained by Dermot Weld. Being the only Irish jockey on an Irish horse to have achieved this. An anecdotal story about being a marked man after winning the Belmont Stakes. Track 9: Ups and downs throughout his career. The jockeys in the industry that he admired. Spending six years with Aidan O’Brien at the height of his career.