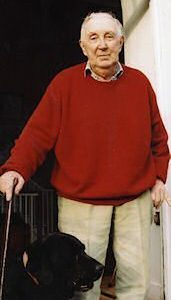 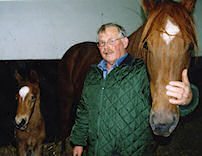 Track 1: His background in Greenpark, Limerick, his early education and finding work with the McClintock stables in Rochestown, near Cork city, for seven years. Track 2: In the 1940s, transportation of horses by CIE to England. Track 3: Starting work in 1952 with O’Gradys as a travelling Head Lad. Track 4: Working with O’Gradys and his memories of those working days there. Track 5: His first trip overseas to England in 1946 for the McClintocks, and describing the journey in great detail. Also his first trip to England with horses for the O’Gradys, one of which was owned by the Duchess of Westminster. The various jockeys who rode for the O’Gradys. Track 6: The work carried out by a groom in the O’Grady stables and sleeping over the stables until his marriage. Track 7: The techniques he used in breaking in a thoroughbred horse. Track 8: His very early days growing up and his mother’s family, the O’Sullivans of Gneeveguilla, Sliabh Luachra, Co. Kerry. The long service of sixty years he gave to the O’Gradys. Track 9: Point-to-point races in Tipperary and his long standing membership of a club there. His belief that the best horses are reared on the Golden Vale.