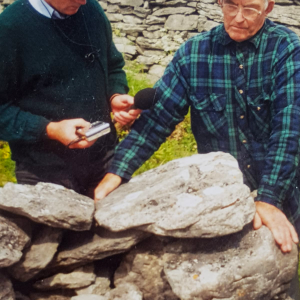 A farmer of 77 years from Carron, County Clare, Paddy Hynes farms a local valley in the heart of the Burren limestone territory, where Michael Cusack the founder of the Gaelic Athletic Association (G.A.A.) was born. I recorded Paddy at the school in which Michael Cusack taught. In this interview I recorded Paddy’s memories of folklore and farming traditions through the centuries.