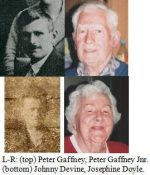 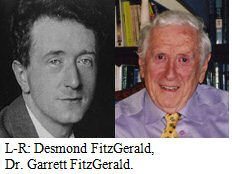 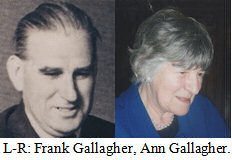 Track 1: Josephine Doyle discusses the early death of her mother, Alice Nolan, and her subsequent adoption by Johnny Devine and his wife, Josie, who lived in Lusk, Co. Dublin. She also explains that Johnny Devine fought in the battle of Ashbourne and had been a member of Tomás Ashe’s pipe band, along with his brother, Frank Devine. Peter Gaffney, whose family came from Balruddery, Co. Dublin, discusses his father, Peter Gaffney’s activities during the period 1919-1923, particularly his involvement with the local Flying Column during the War of Independence. He also discusses the Battle of Ashbourne, and he explains the reasons why his father was not involved in that conflict. Track 2: The splits which occurred in many local families following the signing of the Treaty are recalled by Peter Gaffney, and Josephine Devine displays and discusses a photograph taken at Frongoch Camp in North Wales after the Rising, which includes Johnny Devine and other local men. She also recalls Johnny’s mother’s premonition about the return home of her son, Johnny, who was imprisoned in Frongoch Camp. Track 3: Letters written by Johnny during his imprisonment in Frongoch Camp are described by Josephine Doyle, and she and Peter Gaffney recall the setting up of the Fingal Old IRA Men’s Welfare Society in later years. The musical legacy of Tomás Ashe and the musicians of The Black Raven Pipe Band are described. The visit of Éamon de Valera to Lusk, during the 1966 Commemorations, is recalled. Track 4: Peter Gaffney discusses his own involvement in raising funding for the Fingal Old IRA Men’s Welfare Society, as also did Johnny Devine, and the local families’ adoption of opposite stances during the Civil War. The work of his father, Peter, in training and breaking horses for farmers is recalled by Peter Gaffney, and Josephine Doyle describes her father Johnny Devine’s working life with Dublin Co. Council.