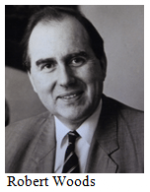 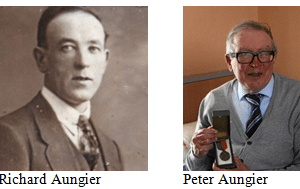 Sir Robert Woods, grandfather to the interviewee Robert Woods, was sent to school and university in Dublin from his home in Tullamore, Co. Offaly. He continued his medical studies in Vienna before returning to Dublin to set up his medical practice in 1893. He and his wife, Margaret Shaw, reared two daughters and three sons. His grandson Robert discusses a letter written by his aunt Molly in Dublin in 1916. She is writing to her brother, William Thornley Stoker Woods, who was fighting in the trenches in France and who was later to be killed in action. She provides a detailed account of events she witnessed during the Rising. The Woods family home at 39 Merrion Square was later to become the British Embassy. Molly comments on the behaviour of the combatants and explains how she will have to explain the Rising and its context to English people when she returns to Girton College Cambridge. She attempts to be objective about the Sinn Féiners and she includes some sketched maps of various locations around Dublin. During the Rising, a field hospital was set up beside the Woods home, at 40 Merrion Square, where Sir Robert treated some of the injured. Sir Robert worked as an ENT surgeon at Sir Patrick Dunn’s Hospital and his grandson notes that he refused to share confidential patient records as ordered by General Macready during the War of Independence. Robert considers his impression of his grandfather which has been handed down to him through his family, and he reads a description of his grandfather’s butler, a man named Lloyd. He recalls his aunt Molly, who married academic Gilbert Waterhouse. He reflects upon his grandmother’s tragic wartime losses. Her eldest son and her two brothers, Rowan and Billy Shaw, all of whom are buried in France or Belgium, were killed in WWI. His grandfather’s political career as Member for Trinity College Dublin is discussed by Robert, who has the papers relating to the election in 1918. On the Irish situation, Sir Robert showed himself to be liberal and open-minded. His grandson reads from a letter written in January 1919 and sent to Sir Robert from the Mansion House. The letter records the fact that Dáil Éireann has been brought into being, to the opening of which Sir Robert is invited, as an elected member to Westminster. Robert explains that this letter would have been sent to all MPs at the time and he examines a list of those who attended this event in 1919. He explains that his grandfather was one of a few men invited by de Valera to a meeting in about 1920 to ascertain their views on the Unionist position. He reads from his grandfather’s record of that meeting. Some letters written in July 1921 relating to a proposed conference in London between Prime Minister Lloyd George and Éamon de Valera, or his representative, are examined. Robert reads one of these important letters from Lord Midleton to Sir Robert, and his reply. The typewritten transcript of a letter from the Prime Minister to Lord Midleton and the transcript of a letter written by Éamon de Valera from the Mansion House to the Prime Minister are also read. In his collection Robert also has some telegrams from this time, which he now reads. Among the 1921 cache of documents are details of a code, which is read, and Robert suspects that this was to be used for telegrams. Also read is a letter from de Valera of 29 June to Sir Robert in which he is invited to a meeting a few days later at the Mansion House. The letters cover quite a short period when matters moved very quickly. Fortunately, his grandfather kept these papers which are in Robert’s possession today. He does not consider his grandfather to have been a die-hard Unionist but says he was put up for election by his medical colleagues at Trinity College Dublin to challenge the hold of the lawyers on the university seats at Westminster.