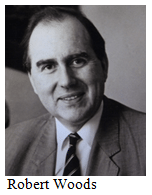 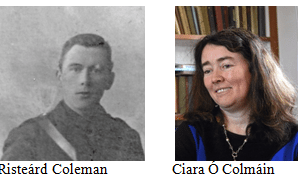 Rich (Dick) Aungier grew up in a thatched cottage in the village of Lusk with his sisters, Maggie and Katie, and his brother John. Peter Aungier initially discusses his father’s interest in the Irish language, and remarks that Dick and his sister Katie’s names are written in Irish on the 1911 Census form. Dick’s two sons, Richard and Peter, were educated in an all-Irish school in Dublin. Dick Aungier rarely spoke about the events of 1916, though Peter recalls that he did mention the fact that the men travelled on bicycles, and hence were known as the Fingal Flying Column. The flying column attacked a number of places during Easter Week 1916. They attempted to blow up a large railway bridge, the Rogerstown Viaduct north of Donabate, in an attempt to stop British reinforcements coming from Belfast. The attempt failed, but in 1960, when Peter was working at Coras Iompair Éireann, he was engaged in the reorganisation of the filing of old maps, and he remembers one map which related to damage done to bridges “during the Sinn Féin rebellion”. The first time Peter recalls the Battle of Ashbourne being mentioned in conversation was when the memorial was being erected, and Dick asked Peter to accompany him to its unveiling. Peter provides detail on the Battle of Ashbourne which occurred on the Friday of Easter Week 1916, when the Fingal Flying Column attacked the RIC barracks in the village of Ashbourne, Co. Meath. Peter explains that earlier in the week they had captured the barracks in Swords and in Donabate in Co. Dublin and had got more guns and ammunition, so they were likely to have been confident. The Battle of Ashbourne lasted nearly six hours. Two Volunteers were killed and five wounded, and of the police, eight were killed and fifteen wounded. A number of police drivers were killed and wounded also. On the following Sunday, the Flying Column surrendered on the orders of P.H.Pearse. They had not been defeated, and their tactics were to be used all over the country in the subsequent War of Independence, which made the country ungovernable. Following their surrender, the members of the Fingal Column were sent to Britain and jailed. They were released on the following Christmas Eve. Peter has his father’s tin box of memorabilia in his possession, and included are his 1916 medals and items made from animal bone at Frongoch Camp. Also included is a bag made by Dick and a set of rosary beads given to him by a fellow prisoner at Knutsford Prison in the same year. During Peter’s childhood the family made an annual visit to the Aungier family home in Lusk where Dick’s sisters, Katie and Maggie, still lived at that time. Peter remembers his Aunt Katie telling him about the Black and Tans who came to the cottage one day, searching for Dick. Peter reads from Dick Aungier’s application for a 1916 pension which includes the dates and locations on which he fought during the 1916 Rising. He was in receipt of an old IRA military service pension. Next discussed is an invitation from the Minister for Defence in 1936 to Dick Aungier to attend the presentation to the President of the Executive Council, of the Roll of Honour, signed by the participants in 1916. Peter remarks that during World War 11 his father again defended his country through his service in the ARP, and explains that his father did not approve of the six counties in the north being separate from the republic. Dick Aungier always supported Éamon de Valera but he took no active part in the Civil War. He was in favour of a united Ireland, though Peter remarks that he never gave any indication as to how this might be brought about. Peter grew up in Whitehall in Dublin with his parents, his brother Richard and his sisters Maureen and Kathleen. His mother, Julia, died in 1953 and when his father neared the end of his life he lived with his daughter Maureen in Glasnevin. When he died in 1962, he was afforded a military funeral and is buried in Glasnevin Cemetery. His gravestone bears no indication of his part in the 1916 Rising. The forthcoming commemorations in 2016 are considered. Peter is pleased that Ireland is a free country and he reflects on the efforts made by his father and his comrades to achieve that freedom.