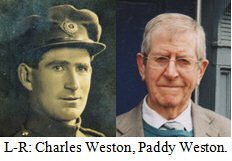 Track 1: Contains an explanation of the strongly republican Walsh family background in Glashbee, near Bweeing in North Cork, where Sheila Healy’s grandmother, Julie Walsh (née O’Hanlon), was the driving force. Sheila describes the mobilisation of the Irish Volunteers of North Cork at Bweeing village at Easter 1916. Track 2: The Walsh home at Glashbee was used as a safe house, and republican figures such as Éamon de Valera, Erskine Childers and Liam Lynch would stay there, explains Sheila Healy. She also mentions that her father, Batt Walsh, always kept in his wallet a photograph of Liam Lynch, autographed by de Valera and Lynch. She points out that a neighbour of the Walsh family was one of those executed by the Free State authorities during the Civil War. Sheila’s father and his family were forced to emigrate to America after the Civil War to find work, having taken the “wrong” side during the conflict. Track 3: Sheila Healy’s aunt, Mary Walsh, is recalled, as is her involvement in the War of Independence. Sheila reads from notes written by her father during those years. The funeral of Éamon de Valera is recalled and discussed and also recalled is Sheila’s uncle, Tom Walsh, and his treatment by the Black and Tans. Track 4: The disappointment and distress felt by Batt Walsh in relation to the Northern Troubles is described. Sheila explains how the financial position of republicans after the Civil War was very precarious. Also recalled is the collecting of guns from republicans in local towns and villages after the Civil War. Track 5: A story is recounted relating to the presence of Éamon de Valera in Glashbee, on the evening of the shooting of Michael Collins, 22 August 1922, and his response to this event: “I came south to meet Collins. There’s no hope for it now.”