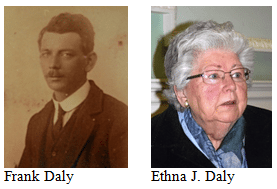 Sibéal Doolan recalls her father, Joseph Doolan, who was a member of 4th Battalion A Company of the Irish Volunteers. He was arrested in 1916 and was interned at Knutsford and Wakefield prisons and at Frongoch Camp. Her maternal uncle, cabinet maker Jack Ryan, was interned in Ballykinlar Camp. Sibéal explains that the Ryan home in Harold’s Cross was a safe house. Her mother, Eileen Ryan, was the youngest of nine children and her sister Frances (Fanny) Ryan was a member of Cumann na mBan. The Ryan family owned a candle and tallow factory on Patrick Street, close to the family home. Prior to the Rising, the 4th Battalion would meet at the Plunkett property at Larkfield in Kimmage, Sibéal explains, and training also took place at St Enda’s. Some old photographs are examined, and brothers Frank Byrne, Padraig Ó Broin and Jim Byrne are discussed, all of whom Sibéal knew well. She also knew Paddy Rigney since her time working as a credits clerk in the offices of the Irish Hospital Sweepstakes. She recalls her father remarking that electrician Frank Byrne cut the telephone line to England in the GPO, and that Joe Doolan and Willie Cosgrave tended to Cathal Brugha when he was shot during Easter Week. She remarks that her father wrote an account of his activities during this time. He was later to be appointed chairman of the National Graves Association. He was able to continue his employment in insurance following his release from Frongoch. Sibéal explains that he had no official connection with the struggle after 1916 but he carried dispatches everywhere by bicycle. She describes an occasion when he was stopped by the Black and Tans. He supported the republican side during the Civil War. Joe Doolan met his wife at a céilidhe at the Gaelic League and the couple married in 1925, at which time they moved into the Ryan home at Harold’s Cross. Sibéal’s grandmother, her son Jack and daugher Fanny also lived there. Sibéal recalls Sinéad McInerney, a friend of her aunt Fanny, who had to escape from the house when Sibéal was very young. Joe Doolan died in 1974 and is buried at Mount Jerome Cemetery. He was afforded a military funeral. He is recalled by his daughter as a good-humoured man with a great love of history. The 50th anniversary of the Rising is recalled, and Sibéal explains that she attended the ceremony in O’Connell Street in Dublin, adding that every Easter her father and others would visit Margaret Pearse. The Doolan family came originally from Offaly and Sibéal recalls her father saying that his grandfather was a hedge schoolmaster. She remembers a notebook which was kept by her father at Frongoch and which unfortunately fell apart and is gone. He later wrote a day-by-day account of events at Easter week, and Sibéal has this account. She remembers her father’s talks on Radio Éireann in his role as chairman of the National Graves Association. She would accompany him to ceremonies around the country, and she recalls the unveiling of Seán Heuston Bridge (formerly Kings Bridge) in Dublin. The renovation of the national plot at Glasnevin Cemetery is remembered. Sibéal examines her father’s medals including the Survivor’s Medal he received in 1966. She says that she wears his 1966 medal at appropriate events, and she speaks of her desire for a thirty-two county Ireland. She discusses the history of her home and explains that the Ryan family moved into the house in Harold’s Cross in the mid-19th century. The history of the area is discussed. She recalls the men of the Kimmage Garrison who would meet every Easter until no survivors remained. The historic Plunkett house at Larkfield is remembered, the demolition of which Sibéal deplores.