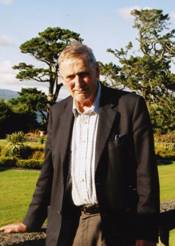 Track 1: Sir Cosmo Haskard describes the original meeting of his parents at the home of the Harold Barry family while his father, an army officer, was stationed at Buttevant. Track 2: The sale of Ardnagashel is recalled. Track 3: Sir Cosmo Haskard’s present home at Tragariff, built by his father in the 1930s is discussed. Track 4: Celebrations which took place when the building was completed are recalled, as are some of the builders who worked on the property. Track 5: The unease, uncertainty and tension experienced by the Protestant families during the Troubles of the 1920s are discussed by Sir Cosmo Haskard.