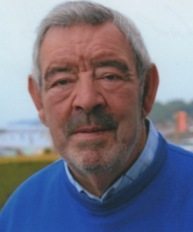 Track 1: Tim O’Brien outlines his family’s history in relation to the Post Office in Clondalkin which stretches back to the period before the Great Famine. He recalls his early memories of helping out in the post office, particularly at Christmas time, and he explains that his grandmother, Josephine Whitty, was the retired Postmistress during his childhood and that her husband, James, had been the time keeper at the paper mills. Tim’s aunt, Jo Whitty, and her sister were the last of the family to run the post office, and Tim remembers the ending of the family connection and the subsequent takeover by another business. His father, Brendan O’Brien from Fermoy, Co. Cork, moved with his family to Donnybrook, and Brendan worked for the Irish Insurance Company, collecting premia door-to-door in Clondalkin and the surrounding areas.
Track 2: Tim’s mother, Dymphna, worked in the paper mills before her marriage, and to Tim’s knowledge she was doing secretarial work and was possibly secretary to the Company Secretary. Tim joined the mills in late 1970, starting off in the Purchasing Office under John Campion, the Purchasing Manager, and he remained in this section until the Spring of 1977. His colleagues included Ollie Gleeson, John Sheehan, Liam Leonard and Jerry McDonnell. Their job was to source the raw materials for manufacturing and machinery spares, working very closely with the Stores Department. Tim details some of the work carried out, which he remembers as being very interesting. Much of the machinery spare parts and chemicals had to be imported from the UK and the Continent, so he was involved with currency exchange and customs declarations. He recalls the other large employers in Clondalkin, businesses such as Clondalkin Concrete and Weatherwell tile factory. This meant that the village had three exporting factories operating. He remembers that at one stage the mills was exporting wood pulp to Scandinavia. The pulp was produced at a Bauer plant set up in the early 1970s which produced very high quality pulp, but the 1970s oil crisis affected the cost. He believes that the plant was dismantled and shipped back to the USA. Track 3: Tim describes his daily work in some detail. The office was always very busy with incoming post and the arrival of phone calls and telexes, and he recalls the time management required to align available machinery spare parts and time down on the machines to allow the engineers to maintain them. Much of the day would be spent liaising with engineers such as Barnty Fitzpatrick, Johnny Campbell, Brendan Halford, Terry O’Neill and Ger Rahilly. A lot of contact was maintained between Stores and Purchasing Departments, and Tim discusses the purchasing process and the experience and judgment used by his department. During his time at the mills, he studied courses at the Irish Institute of Purchasing and Materials Management, which he says were very good. He reflects on the fact that buying at the right price can directly affect the business’s profit line, and he discusses the changes which have occurred over time, particularly in relation to customs clearances. The paper mills employed customs agents with expertise in the details of custom and excise duties. Import licences were also required, he explains. Track 4: He recalls the state of the paper mills in 1977 when he resigned, and he explains the reasons why he left. He was offered a position as Purchasing Manager with Windsor Stationery in Bluebell. He could see that his colleagues who left the mills were not being replaced, resulting in more work for those who remained. In his opinion, at that time, work which had previously been routine was not being done until the situation became critical, and he gives an example relating to licences which had to be applied for from the Department of Industry and Commerce in order to import certain materials. If these were not applied for, a shipment would not clear customs at Dublin docks. He recalls the effect of strikes on the local economy, such as on his father’s insurance business. Tim met his wife, Cora Cantwell from Walkinstown, when she became a secretary in the Purchasing Department in about 1974. He recalls that at the time Clondalkin was still surrounded by fields. Having left the stationery company, Tim became Purchasing Manager for the Gowan Group, working in the motor trade, and he remained in this business for 31 years until he was made redundant five years ago.