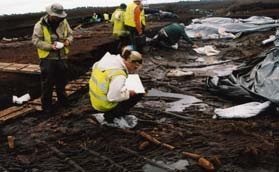 Tom Egan, Kathleen Farrell and Jerry McNally are employed at Lough Boora Parklands by Bord na Móna. Jerry McNally has worked for the Bord for 3½ decades, and he describes, in the recording, the suitability of the cutaway boglands for the production of forestry and the prairie land conditions. Earlier in his career with the Bord, he was in charge of a large herd of cattle at the Clonsart cutaway bog. He discusses the interesting geology in Lough Boora. Kathleen Farrell holds a PhD in Ecology and she is in charge of wildlife at Lough Boora since 2001. She describes the wildlife of the wetlands at Lough Boora and she explains how she monitors the wildlife in the park. Jerry McNally and Tom Egan discuss the ancient bogwood which they have uncovered from the lower levels near the topsoil, and the ancient pathways through the bogs. The recording concludes with an interview with CEO, Bord na Móna, Mr Gabriel D’Arcy. He was recorded in his office at the Bord headquarters at Newbridge, where he discussed his first impressions of the company when he became CEO in 2007, the company structures and his plans for the future of Bord na Móna.