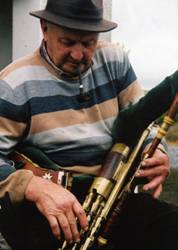 In the 1920s Tom Kinsella’s father came from Coon near Castlecomer, to farm the land at Ballasalla. His four brothers had emigrated to Perth in 1909. Tom has in his possession a wonderful collection of letters from his uncles in Australia to their mother in Coon. The letters give a clear and vivid picture of the journey to the other side of the world, their arrival and first impressions, and the way they settled into their new homes. Many people from the Coon area had also travelled to Perth, and they were to set up what was virtually an Australian home from home. In this recording Tom Kinsella reads from some of these letters which provide a wonderful narrative of the emigrants’ story. Tom also discusses the carving up of estates locally which he himself witnessed during the era of the Congested Districts Board and the Land Commission. He describes the archaeology evident on his land, which borders the two parishes of Johnswell and Clara, and he also discusses the placenames and their meanings.