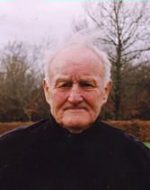 Track 1: Grew up in Knocknavilla, between Cashel and Dundrum, one of 14 children, from a family of stonemasons; left school as a young boy to work as a labourer for a local farmer. Began his apprenticeship as a stable hand with Tim Hyde at Camas Park Stud, where he remained for three years. Track 2: Emigrated to England in 1953 and worked as a freelance jockey. Also worked in construction in Heathrow. Met his future wife, Frances O’Brien, at a dance in Hammersmith. Track 3: Returned to Ireland to work with his brother Dan, who retained him as a jockey at his stables in Mullinahone. The way of life of his parents and siblings during his childhood. Track 4: His first race in Ireland; competed in three Aintree Grand National races; some of his memorable wins; riding for many of the well-known trainers in Ireland until the age of 47. Track 5: The salary structure for jockeys; his riding technique over the years; the challenge of maintaining his optimum physical condition and appropriate weight of 9 stone, and less on some occasions. Track 6: After retirement as a jockey, turned his talents to horse training, which he continued for 22 years; the various locations from which he operated his business.