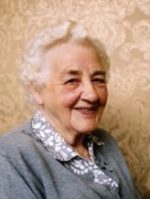 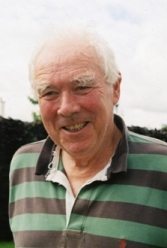 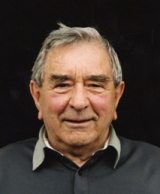 Track 1: Memories of growing up in Offaly Street, Tullamore and of her father, Paddy, who was a pig buyer. She had six brothers, all of whom worked for Williams’s at one time. Joined Williams’s herself in 1947 as a labeller. A sad story involving a number of employees who were travelling to the Eucharistic Congress in 1932 in a company lorry provided by the company. The truck struck the bridge at Leixlip with some loss of life. Track 2: Detailed memories of the work involved in labelling, including making the paste, measuring the accuracy of the label’s position and polishing the finished bottles. Discussed the uniform worn by the staff, and the banter and fun among the girls. Her move to administration in the bond store; her responsibility to ensure accuracy and precision in labelling. Track 3: Childhood in Offaly Street and the games the children played, including whipping a top, playing hoops and fishing on the canal bank. Her father’s work in the pig trade and memories of the pig fairs in Tullamore. Track 4: Memories of meeting her late husband at a dance in the local St Mary’s Hall, where the music was provided by the St Columcille Pipe Band. Track 5: Reminiscences, with contributions from Seamus O’Connor, of the many religious events, societies and ceremonies in the local Catholic church in days gone by. These included Holy Hour, the Sacred Heart Fraternity, the women’s sodality, the women’s mission, the temperance meetings, rosary and benediction, the angelus, high Mass and low Mass; and the hymns that were sung are recalled.