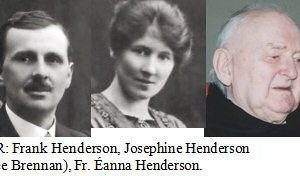 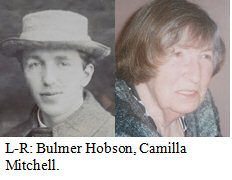 Track 1: Brigid Hogan O’Higgins explains the historical significance of her home, Kilrickle House in Loughrea, Co. Galway, which was partially burned during the Civil War. A description is given of her two uncles, James and Michael Hogan from the Clare Brigade, who had intended, before the Countermanding Order issued by Eoin MacNeill, to become involved in the 1916 Rising. Track 2: Brigid Hogan O’Higgins recalls that her father, Patrick (Paddy) Hogan, a solicitor who set up a practice in Loughrea, Co. Galway and who was elected TD for the First Dáil, was killed in a motor accident in 1936. She tells us that her mother, Mona Farrell, had been previously married to Michael Davitt, who died in 1927. He was the son of patriot Michael Davitt, agrarian agitator and founder member of the Land League. The round-up of agitators, including her father, Joe McGrath, Paddy McGilligan and Tom O’Higgins, by the British during the War of Independence is recalled, along with their imprisonment in Ballykinlar Camp in Co. Down. Track 3: Mention is made of the fact that Thomas MacDonagh (executed leader of 1916) taught Brigid Hogan O’Higgins’ mother, Mona Farrell, and her aunt Mary Hogan. The partial burning during the Civil War of Kilrickle House in Loughrea, owned by the Hogan family, is recalled. Brigid’s grandmother, her mother Mona and her five children, one of whom was Brigid’s step-brother Michael Davitt, lived at the house following her father’s death, and she recalls the fate of her father’s papers. Track 4: The pro-Treaty debates and her father’s role are discussed, as is his tenure in Government, including his time as Minister for Agriculture, his role in establishing the Sugar Company, in ACC Bank and in other establishments. The friendship which existed between Paddy Hogan, Kevin O’Higgins, Desmond FitzGerald and Michael Collins is recalled. The fact that Paddy Hogan was godfather to Maeve O’Higgins, daughter of Kevin O’Higgins, is revealed. The executions which took place during the Civil War, and other events of that fearful time, are discussed. Track 5: Mention is made of James Hogan, a first cousin of Brigid’s father, who was British Governor of Hong Kong. The deaths of Arthur Griffith and Michael Collins, and the consequences for the new Irish Government, are discussed. Nora Hogan, Brigid’s father’s sister, who was a missionary sister in China for many years, is recalled. Track 6: Provides a detailed description of the shooting of Kevin O’Higgins, and her father’s devastation as a result. The discovery of the identity of the killers and the consequences of this are explored. Track 7: At the age of 24, Brigid Hogan O’Higgins was elected Fine Gael TD for South Galway, and she describes her first day in the Dáil in 1957. A conversation with Dan Breen on that occasion is recalled, as are the high and low points of her career as a TD.