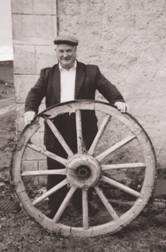 Con Ryan’s ancestors have lived in Upper Church for eight generations. Con explained to me that both his grandparents were Ryans, and were identified by their nicknames. We visited the local graveyard, and spoke about all the people who had lived locally, and were buried there and about their adventures and achievements in life. Most of these people had been tenant farmers. A fascinating account of the War of Independence and Civil War, in which his own people had fought, was relayed to me. Finally, he told me that there was a strong tradition in the locality of oral history, much of which he had collected himself from the older people.