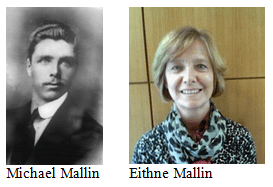 Máire Nic Shiubhlaigh (Mary Walker) was David Kenny’s grandaunt, and she was the very first leading lady at Dublin’s Abbey Theatre. David describes the divergence in the Protestant Walker family of Carlow and Kilkenny in 1845, when his great-great-grandfather, Francis Walker, left his family to set up in business. By trade he was a bookbinder and on his marriage he converted to Catholicism. His son, Matthew Walker, was a master printer and a member of the IRB, and he changed his surname to ‘Shiubhlaigh’. He was connected with various Irish nationalist causes. David describes the foundation of the Abbey Theatre in his grandmother’s kitchen in High Street in Dublin. The members of the Walker family involved with the first productions at the Abbey are remembered. Matthew Walker instilled a love of nationalism and of the Irish language in his children, and his daughter Máire became a member of Inghinidhe na hÉireann. David’s grandmother, who was known as ‘Gypsy’, was the youngest daughter of Matthew Walker. She was widowed as a young woman in the 1930s. The part she played in the Irish cultural movement of the 1910s is discussed, and her engagement to James Crawford Neill is described. Crawford Neill’s injury and death during the Rising is also recalled. At that time Gypsy was carrying dispatches for Charlie Burgess (Cathal Brugha). She was concerned about her fiancé and was to find him in hospital shortly before his death. David’s grandaunt, Máire, was Gypsy’s eldest sister, and he explains that she is featured in some of John B. Yeats’s paintings. He explains that her father had received news about the Rising through the IRB and had tipped her off when it was about to begin. David describes an incident when a British officer knocked Máire off her bicycle when she was on the way to take part in the Rising. As a member of Cumann na mBan she was based at Jacobs’ Factory, which was under the command of Thomas MacDonagh. Her future husband, Éamon ‘Bob’ Price, was a member of C Company IRA. David recounts an anecdote told to him by his father, Edward, about Máire’s time at Jacobs, which highlights the fact that she was a cultural nationalist rather than a fighter. Her published memoirs, entitled The Splendid Years (1955) was written with the help of her nephew, Edward Kenny (David’s father). The book describes the years of the national revival and the events of the Easter Rising. David reflects on the account of the surrender in 1916 provided by Máire and Bob Price. He explains that most of the members of Cumann na mBan slipped away and were to disappear from the historical record. Máire went to Cavan to help with organisation there during the War of Independence. Bob Price was interned at Frongoch. David considers Bob and his family as important figures who have not been given due recognition. Edward Kenny donated the greater portion of his papers to an American university in 1966, leaving the ephemera. David recalls examining these items after his father’s death. A letter written to Máire in the 1950s by Ronán Ceannt is discussed. David remembers his great-grandfather, Matthew Walker, who had a tobacconist shop in Dublin city. On the morning of the Rising, when Matthew was in his late 60s, he walked from his home at Glasthule into the GPO in O’Connell Street to volunteer. Pearse gave him copy to publish as the Irish War News, and a printer was persuaded to let his printing works be used for the week by Matthew Walker and his sons. The controversy which resulted in his grandmother losing her late husband’s business, is recalled. The Tower Press was purchased by Joe Stanley. Unfortunately Matthew Walker’s role in nationalist publishing has been airbrushed out of history, David says. He explains that his granduncle Charlie, his great-grandfather and his grandaunt Máire received the 1916 medal. He remarks that these people were of a generation which was modest and it was followed by a generation of political self-promoters. David considers his relationship with his father and with the family history, and he remarks that his father, Edward Kenny, was embittered about the fact that the family had been largely forgotten. David returns to the role played by the Walkers in the foundation of the Abbey Theatre, and explains that the creation of a national identity was crucial to that generation. Máire Walker was closer to Willie Pearse than his brother Patrick, David says. An incident at St Enda’s described in her memoirs showed Patrick’s care for his pupils. David recounts this anecdote to highlight Pearse’s love of life but also his awareness that his death was likely following the Rising.