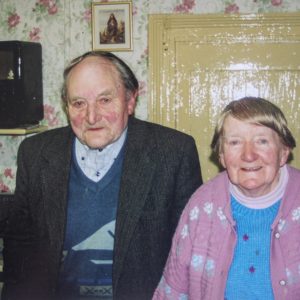 Francie Noonan and P.J. Connaire have lived all their lives in Attymon, Go. Galway. Francie explains that Attymon House was built in 1830 by Lord Dunsandle for his mistress whom he later married. Later the house became the property of the Blake family and later still it was acquired by the Bishop of Clonfert through the Land Commission. It was used by the Catholic curates of the area.

In later years Francie Noonan became caretaker at Attymon House and P.J. Connaire lived at the gate lodge. PJ recalls being an altar server during Mass at the house at one time. Both men speak about strange occurrences in the house over the years, and describe visions of a young woman, a priest in the garden and unexplained noises which they heard. A section of a recording compiled in 2003 with the late Valerie Barry, who lived at Attymon House with her husband Brian in the 1970s, is included in this recording. She recalled her own experience of strange happenings in the house while she lived there. In the 1960s, a UFO was reported to have landed in the area. The ghost stories, beliefs, customs and traditions of the local people are described.