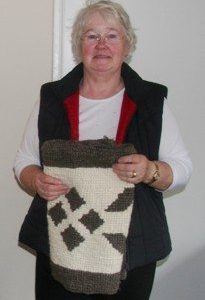 George and Violet Hunter are dairy farmers. George lived in a thatched house when he was younger and describes his childhood with his parents who were also dairy famers; he grew up in a family of twelve. They had ten or twelve cows and George began milking them when he was around seven years old. He recalls supplying local businesses with milk as they delivered it door to door. It was difficult in those days due to the absence of fridges. You could get everything in a grocery shop at that time, except milk, he says. He discusses the process of churning butter long ago with the cream and the milk. Violet makes butter at Heritage Days, keeping up the old traditions and showing people how it was done. She also grew up on a farm and there were nine in her family. She recalls her mother churning as she watched her, which is how she learned. There is a great love for Violet’s butter in the area. George describes the changes in the methods of milking from the early days right through to today, from milking by hand, to using the milking machine.