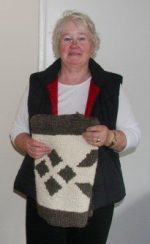 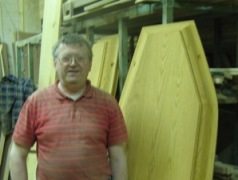 Rosaleen Holland is from Drumcliff, Co Sligo. Her craft involves the making of liomra – the Irish word for fleece, made from raw sheep’s wool. The first liomra she saw was made by her mother. She remembers her father was very skilled and could make anything from coffins, to tables, to mending shoes. Craftwork is in the family. Rosaleen remembers her mother making fleeces, and she describes the whole process, from sourcing the wool to buying and making the dyes. Rosaleen took up the craft and now makes mats and wall-hangings which she sends to America, Australia and England. She is a member of the ICA which promotes old Irish past times and skills. She talks extensively and enthusiastically about the work undertaken by the members of the ICA. Rosaleen Holland talks about her passion for the ICA and the camaraderie between the women. She recalls her application to join the Garda Siochána in 1960. She was the only woman who applied and describes the interview process. She has very fond memories of Achill Island and going to dances which she enjoyed greatly. Also recalled were the exciting parcels from America, which contained old and new clothes. She has a great love for people and for life which shines though in this recording. She loves being alive, she declares.