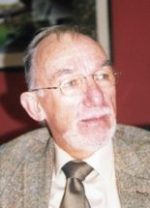 Track 1: Architect Harry Wallace is a Cork man who came to Killarney in 1974 to work with DMP Architects. The following year he opened his own architectural practice in the town, and he admits that he has always felt that he has been regarded as a “blow-in”. For many years, he explains, he was involved in the improvement of the streetscapes in Killarney by introducing flower boxes for added colour, and other projects. The demolition of some of the old buildings and the conservation of other buildings in the town are discussed. Track 2: A series of drawings by Harry Wallace for a proposed building which incorporated a 240 ft tower to overlook the town and the lakes at the site of the Glebe Hotel are examined and discussed. His interest in aviation, his involvement with the Kerry Aero Club and his input into the development of Kerry Airport are discussed. His work on Killarney Cathedral and his professional relationship with Bishop Dermot O’Sullivan are recalled. Track 3: The earlier renovation work on the Cathedral is discussed, and the zoning of land for building purposes are also explored. Harry Wallace explains that his contract for the INEC at the Gleneagle Hotel, completed in 1980, was the most challenging and satisfying project on which he has worked for the town of Killarney.