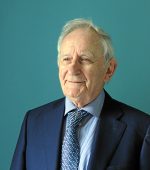 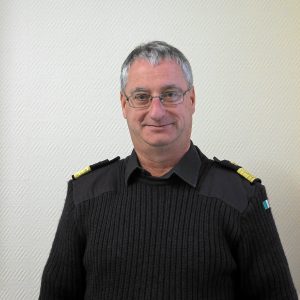 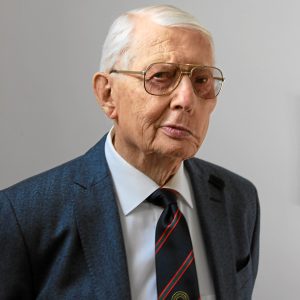 Frank McCabe grew up in Ballybay, Co. Monaghan. He describes his early education and his graduation with a degree in engineering from UCD in 1957. His first employment was with STAL in Sweden, a Power Generation subsidiary of what is now known as ASEA BROWN BOVERI. In 1962 he was appointed Deputy GM of Derrinlogh/Croghan Briquette Factories, where he remained for three years. In 1965 he left Bord na Mona to study for an MS degree at Clarkson University New York. The following year he was selected to be Director of Manufacturing Operations with G.E.’s Semiconductor subsidiary in Dundalk.

In 1970 he was appointed Managing Director of G.E.’s EI subsidiary in Shannon. He initiated an R&D centre in E.I. – a first in the emerging Hi Tech sector. This led to the Research, Develppment and Manufacturing of a range of security products which today dominate selected global markets.

In 1979 he was selected as Managing Director of Digital Equipment Corporation European Manufacturing Operations. He subsequently moved to headquarters in the USA where he ultimately held the Executive V.P. role, reporting to the Chairman and founder.

In 1994 he was appointed as V.P. Technology and Manufacturing, and G.M. for Ireland and East Coast Operations for INTEL. This has since grown to a 12 billion dollar investment. His career motto was “Agility Flexibility and Speed” in a robust environment of world best R&D.

In terms of public service, he held roles as Chairman Shannon Development, Board member IDA, Vice Chairman Science Foundation Ireland and Arizona Science Foundation. He was a Board Member of CITIBANK Europe and Chair of Audit Committee for nine years.He received Honorary Doctorates from N.U.I. and D.I.T.

He concludes by outlining the highlights, and the challenging points, in his long and extensive career in Ireland and abroad.