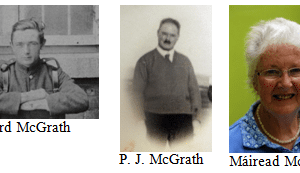 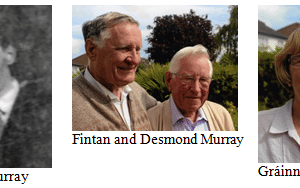 The Nunan family came from Newcastlewest in Co. Limerick. Jim Nunan’s grandparents emigrated to London and their son Ernie became a member of the IRB there. As a young man he came to Dublin and he and his brothers were involved in the 1916 Rising. In England, their father James was also involved, as were his daughters, and at one stage they arrived in Ireland but were deported by battleship back to England. Ernie Nunan and his brother Seán were members of the Kimmage Garrison. Ernie was a good friend of Seán ‘Blimey’ O’Connor. He was stationed at the GPO during Easter Week. Jim explains that Ernie burned all his papers prior to his death, though Maurice Good wrote his story in his book Enchanted by Dreams. Ernie was very much a republican, and was friendly with Michael Collins since their time together in London. Jim explains that his grandfather introduced Michael Collins to the IRB, and Collins in turn brought Ernie into the fold. Ernie never spoke about that period of his life except to tell of some amusing incidents. One story involved ‘Blimey’ O’Connor who, when the Black and Tans came raiding, hid in an oven on one occasion. Jim discusses what he has learned about his father from reading Maurice Good’s book, and says that from this account his father appeared to be a different person to the man that he knew. The court martial of the Nunan brothers because of their refusal to serve in the British Army during WWI is recalled. Jim is not aware of the details of his father’s life during the War of Independence. His uncle Seán had returned to England by the outbreak of the Civil War and he was to be appointed Ireland’s first envoy to the USA in the late 1940s by Éamon de Valera. Later he returned to Ireland and was based in Department of Foreign Affairs. After the Civil War Ernie Nunan joined the merchant navy, and on the outbreak of WWII he became a member of the Irish Army. Jim explains that his father assisted with the formation of the Irish Navy and he designed the Irish Navy cap badge. Jim remembers the weekly Sunday meetings of the Goods, the Nunans and the O’Connors at the O’Connor home. He explains that his father had the key to the Four Courts given to him by Seán Lemass, and that this historical artefact has since been donated. Ernie Nunan died in December 1973 and his son recalls the funeral and those in attendance. His father’s disappointment with modern Ireland, particularly during the Troubles in the 1960s, is remembered. Jim remarks that his father initially would not accept either the old IRA pension or the state pension, but his friend “Blimey” persuaded him to change his mind. Jim recalls the continuing connection with “Blimey” O’Connor after his father’s death. He reflects on the way in which the men met up in Irish circles in London prior to 1916. His maternal grandfather, Robert McCreery, was a master tailor and his wife was a tailoress. Jim’s mother was Maud McCreery who was originally from Cavan. He recalls the concern at the time of his grandfather’s funeral as his brother was a staunch Orangeman and his father was an Old IRA man. He explains the reasoning behind his father’s decision to destroy all his documents, and he mentions that Ernie Nunan gave two lectures about his and his brother’s courts martial, though unfortunately records of these are lost. After Ernie Nunan was released from Frongoch, he and his brother Seán were arrested and detained at Wormwood Scrubs. There they refused to wear the British Army uniform and went ‘on the blanket’. They were then put on trial and Gavan Duffy acted as their defence barrister. After their return to Ireland Ernie was a supporter of Éamon de Valera. His son Jim joined the Irish Army and worked as a specialist in the hospital laboratory. He considers the forthcoming centenary commemorations of the Rising in 2016 and the apparent lack of consideration for the relatives of those involved. The commemoration in 1966 is recalled. Ernie Nunan wore his medals on that day and attended on the stand at the GPO with other survivors. Jim speaks about his pride in his father on that remarkable day.