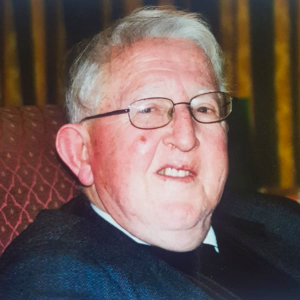 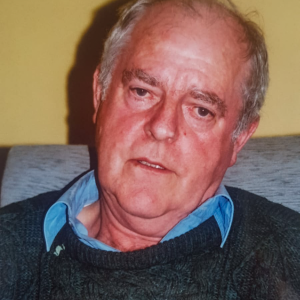 I met Jimmy Hearne at his brother Danny’s house where Danny’s dogs joined the company. Jimmy is now in his 91st year, and his passion for football and hurling was clearly evident in this recording. Jimmy was fostered out to his aunt at a very young age. He played football with a local team, Kilmoganny. He spoke about many of the great players of that time. Jimmy recited a song associated with the Kilkenny football team of 1904 and he continued with another ballad on the Battle of Carrickshock. Jimmy’s stories are mostly from recollections of what he heard at meeting-houses. He finished by showing me sheep-shearing shears used by his grandfather and father, and spoke about the rearing of sheep.

In part two of the recording, Jimmy and Danny Hearne had stories to tell about Castlemorris House, its former owners and the bailiffs. A discussion took place on the political situation nationally and locally throughout the last century. Traditional music and dance was another interesting topic. Finally, Jimmy’s observation on how hurling has changed in its skills, was recorded.

Part three of the interview was with Danny Hearne, a bachelor in his 87th year. This recording was made in a very relaxed atmosphere, beside the old range while drinking cups of tea. Danny’s earliest memories were of the old Castlemorris Estate where his father worked. He talks about the break-up of the estate by the Land Commission. Danny’s landholding is part of the former estate. He joined the Blueshirts at a young age. He recalls the Economic War, when the skin of a calf worth ten shillings, made more than the calf itself. He discusses his work in breeding and rearing horses, and his great success in selling them. He pointed out how he sold two mares to the Duke of Beaufort.